A Flying Jatt movie review: Tiger Shroff as a desi superhero is adorable enough to emerge as children's favourite

The story of this film revolves around an unintentionally funny Martial Arts teacher (Tiger) who is secretly in love with his colleague (Jacqueline Fernandez). His mother (Amrita Singh) takes lone stand to protect her housing society from a corrupt businessman (Kay Kay Menon). 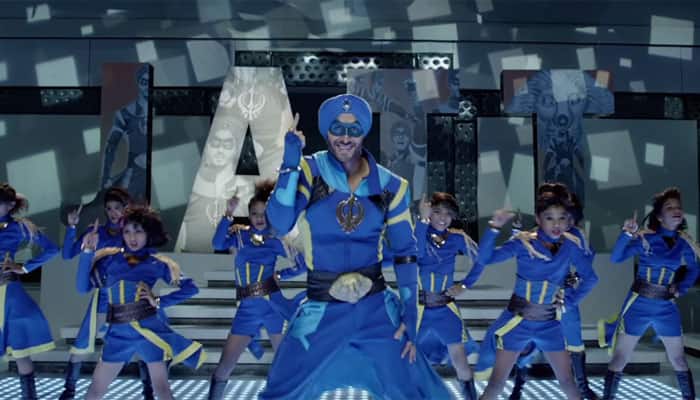 Before watching the film, we were actually wondering whether it is too early for Bollywood actor Tiger Shroff to step into the shoes of a superhero or not. After all, he is just two films old. But, Remo D'Souza's 'A Flying Jatt' cleared our doubts to some extent.

The story of this film revolves around an unintentionally funny Martial Arts teacher (Tiger) who is secretly in love with his colleague (Jacqueline Fernandez). His mother (Amrita Singh) takes lone stand to protect her housing society from a corrupt businessman (Kay Kay Menon).

It wouldn’t be wrong to say that Amrita dominates the first half of the flick. She showcases the true Punjabi spirit and makes people realise the essence of Sikhism whenever needed.

The real drama unfolds when Tiger gets his superpowers. His initial attempts to save the world turn out to be totally hilarious. Then, acting as a good parent, Amrita nurtures the young superhero by making him watch international superheroes on TV. She wants her son to be better than them.

Yes, you read that right. 'A Flying Jatt' is the mumma's boy who flies to clean the ceiling and buys vegetables in the same costume.

Are you listening Avengers? We have found the ideal superhero that Indians ever needed!

Supervillain Raka, played by Nathan Jones, has delivered a convincing performance. Even with minimum dialogues, his act in 'A Flying Jatt' is haunting enough to give you chills.

The struggle to save environment intensifies as Raka vows to destroy the city. Yes, Bollywood clichés are necessary even in a superhero flick.

Sadly, the VFX of this movie is a huge let down when compared to other superhero flicks. Sachin-Jigar's music is quite entertaining.

Amrita and Nathan have kept the 'acting' end of 'A Flying Jatt' strong. Jacqueline keeps on making appearances in the movie. Her performance sometimes surpasses all the cuteness quotient. We felt that a phenomenal actor such as Kay Kay was wasted in this film. His character didn’t get the screen-space that it deserved.

Second-half of the movie loses its track but, somehow, gains the momentum back during the pre-climax scenes. Last 15 minutes of 'A Flying Jatt' are thrilling. Final face-off between the superhero and supervillain is high on entertainment value.

Environmental concerns, religious sentiments, and social issues: the movie is dealing with a lot of stuff simultaneously. And, if you are a sikh, it will surely make you more proud.

Remo D'Souza as a director has done a decent job with 'A Flying Jatt'. Despite loose ends, the film highlights issues that can not be ignored.

Don't consider it a fully-fledged superhero storyline as it only marks the origin of this kick-ass JATT. It has made space for bigger 'A Flying Jatt installments in the near future.

'A Flying Jatt' is entirely made keeping in mind the audiences of younger age-groups. Treatment to the storyline is done in a way that it successfully delivers social messages to the children and, that too, in a way they would love to watch.

We are giving half a star extra to 'A Flying Jatt' for putting forward crucial issues in front of the young India in a brilliant manner. School-going children will definitely step out of the theatre with a lot of learnings.