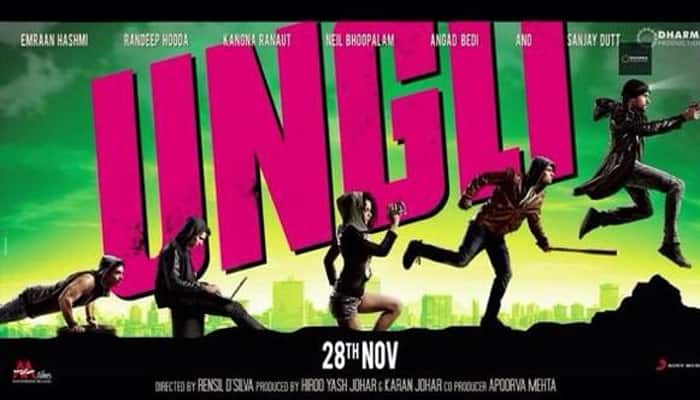 Welcome to the world of 70mm screens. It is the la-la land where anything and everything is possible. There isn't a 'no' certainly in filmy dictionary. Well, that said, filmmaker Rensil D'Silva's 'Ungli' is as suggestive as its title. The movie reminds you of many instances which might have happened in your family or with friends in terms of getting things done the right way.

One old man, who endlessly waits for his Godot (here pension money) to come—only to feel humiliated at the hands of government babus at 'pension office' (as he refuses to give 'upar ki kamai). The film starts from a point where you can predict what is going to come up now.

The audience could very well guess about this old man getting a cardiac arrest due to a scuffle which occurred between him and the babus. Here lies the loophole. This could have been presented in a different way, perhaps. It is old wine in a new bottle, undoubtedly.

However, there are many interesting points too, which make it far more than an average outing. The constant fight of 'aam admi' with the corrupt system, which he encounters and struggles with at almost every step, enrages you but with a sigh! The gang does take upon themselves to put the real criminals in dock, and help the common man—raising a basic question, is it really that easy?

The 'Ungli' gang does have a motive to bust these corrupt people –there comes the flashback story. Bollywood hunk Arunoday Singh aka Ricky (Kangana's elder brother) is in the state of coma because of his good Samaritan trait. The goons behind his terrible state happen to be in connection with the police force—cut to the formation of 'Ungli' gang. The nexus between police and the people in power stir you for once. The filmmaker has tried to show how simple people can be forced to turn rebels, if the guardians of the country decide to go the other way.

The camera work by Hemant Chaturvedi is engaging and rightfully captures the essence of the screenplay. The filmmaker has a vision and tries his best to let the social message out through his brilliant characters. Kangana as Maya is impressive and subtle. There are emotional outbreaks in the course of the film but nothing is loud and over-the-top.

Refreshing change to see Karan Johar back such projects. Special mention must go to Randeep Hooda for portraying a crime reporter perfectly. Neha Dhupia as a journalist makes you want to believe her, lest she was given more screen space.

It would be incomplete to not talk about Sanjay Dutt. The 55-year-old actor as an honest police officer Ashok Kale has done full justice to his role. The camaraderie between Emraan and Sanju baba is new and interesting.

Other gang members—Angad and Neil have been given equal space and they do shine in their respective bits. Reema Lagoo as Emraan's mother reminds you of her playing 'mommy' dear to Salman Khan in many films. The music by Salim-Sulaiman, Sachin-Jigar, Gulraj Singh and Aslam keyi is hummable and not jarring or loud. The track 'Dance Basanti' starring Shraddha Kapoor is already a chart buster and has a nice feel to it.

The film does have a social message which every proud citizen of the country must catch and understand—however, if only what cinema shows could be turned into reality with a whiff of fresh air. Do watch it to find your way of fighting the revolution!