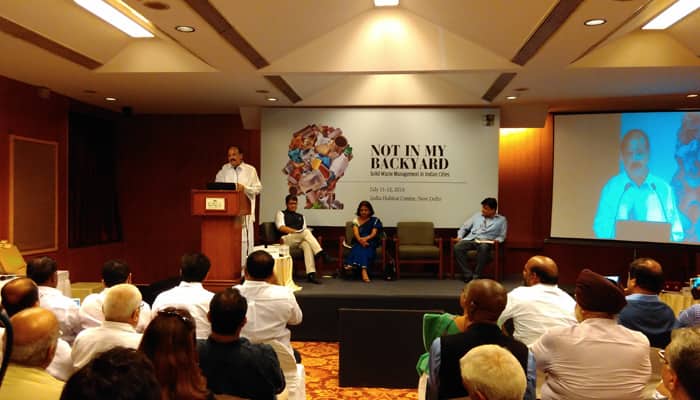 The Clean City awards, instituted by the environmental NGO Centre for Science and Environment (CSE), were given away to Alappuzha (Kerala), Panaji (Goa) and Mysuru (Karnataka) as these cities have “municipal waste management systems that actually work”.

Interestingly, Delhi, Chandigarh and Bengaluru are among the cities that ranked at the bottom in a survey conducted by the CSE.

The awards were given away on the occasion of launch of CSE's book 'Not in My Backyard: Solid Waste Management in India Cities'.

The book “attempts to understand the state of solid waste management in India, the numbers behind it, the gaps that exist and the path towards harnessing the opportunities”.

Talking about the role of both citizens and government in waste management, the minister said there was a need for municipal commissioners to collect taxes from people generating waste.

Citing several instances, Naidu expressed happiness that people at several places in the country were doing their bit to eradicate open defecation.

“A smart city needs smart vision, smart decisions and the ability to take people into confidence,” he said.

He complimented the municipal commissioners and people of Alappuzha, Panaji and Mysuru for being awarded as 'the clean cities for their best practices in solid waste management like zero landfills, segregation of waste at source and decentralised waste management'.

Speaking on the occasion, CSE director-general Sunita Narain rued that fact that authorities in India don't really know how much waste is being generated.

“As we get richer and more affluent, we will generate more waste,” she noted.

So, what's the solution for efficient waste management?

“Change the incentive mechanism to turn people in favour of waste segregation,” Narain said. “Either you segregate waste at source or install expensive emission control technologies in waste-to-energy plants,” she added.

She stressed that 'waste management' can't happen without 'waste segregation'.

“What is absolutely clear to us as we researched for this report is that technology for waste disposal is not the problem. The problem is two-fold. One, households and institutions are not responsible for management, through segregation or payment for the waste they generate. Two, there is an absolute collapse of financial and institutional (human) capacity and so accountability in our municipal systems.

“In this scenario, the best option is what we have found in Kerala, where municipalities have withdrawn from the waste business. People segregate and compost; informal recyclers collect and sell. This is perhaps the most exciting model for future waste business in the country. And even if it cannot be emulated completely, it holds important lessons for other cities,” Narain said.

“As India becomes more literate and politically aware, most cities are encountering stiff resistance when they attempt to dispose of waste in somebody else’s backyard. In Pune, Bengaluru, Panaji, Alleppey (Alappuzha) and Gurgaon, village communities have been up in arms against the dumping of waste by a neighbouring city. This resistance will continue to grow. Cities are also finding it difficult to secure ‘environmental approval’ for their landfills,” CSE deputy director general Chandra Bhushan said.