Both the teams made it to the summit clash, to be played at the Mumbai Football Arena, in a rather contrasting manner. 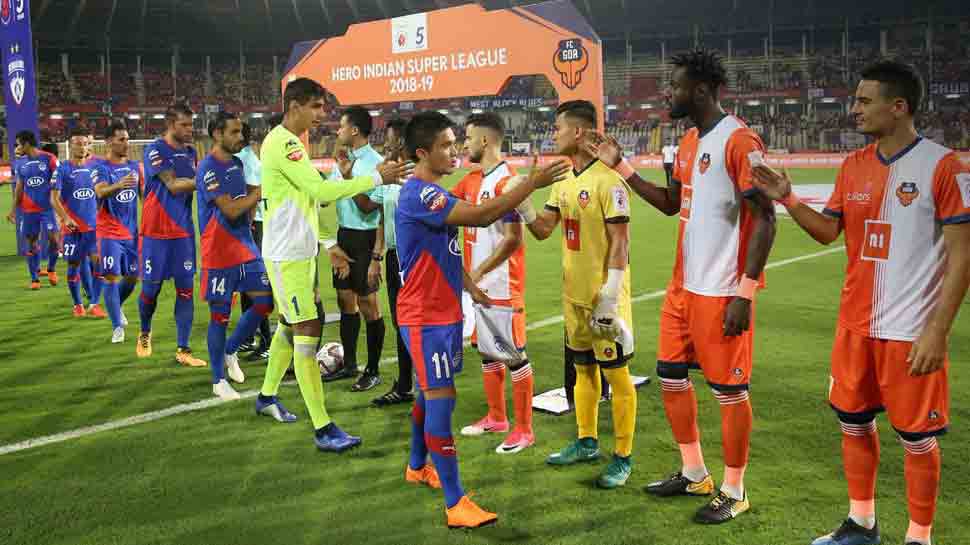 Bengaluru FC and FC Goa will take another shot at glory when they square off in the final of the Indian Super League on Sunday.

Both the teams made it to the summit clash, to be played at the Mumbai Football Arena, in a rather contrasting manner.

Bengaluru had sealed their place in the final for the second successive year with a 3-0 win against NorthEast United FC in the second leg of the play-off, recovering from a 2-1 defeat in the first leg.

Goa, despite a 1-0 loss to Mumbai City FC in the second leg semi-final, made it to the final on better aggregate, having won the first leg 5-1.

Goa were the runners up in 2015, while Bengaluru ended up second best last season. Coincidentally, both the teams had been defeated by Chennaiyin FC in the final.

Going by history, Bengaluru have an edge against Goa. In four meetings between the two teams, Bengaluru have won thrice while Goa's only win came in a tight clash (4-3) last season, in which Bengaluru were down to 10 men after goalkeeper Gurpreet Singh Sandhu was sent off.

The in-form Goa will pin their hopes on 36-year-old star striker Ferran Corominas of Spain, who is the leading scorer this season, with 16 goals to his name.

Corominas has only got better as the tournament progressed and is in line for his second successive Golden Boot award. A good outing on Sunday will only help his cause.

Apart from the strikes, Corominas has seven assists to his credit. He will be a key player along with compatriot Edu Bedia, who has seven goals to his credit and six assists.

The duo form a lethal pair and can breach any defence on their day, and Bengaluru's could be no exception.

Two other important cogs in Goa's wheel are mid-fielders - Moroccon Hugo Boumous, who has five assists to his name, and 26-year old Manipur-born Jackichand Singh.

Added to these names, the likes of Brandon Fernandes, Zaid Krouch and Mandar Rao Dessai make Goa a formidable outfit and the Bengaluru defence could come under immense pressure.

It would be also interesting to see whether Goa use the services of experienced goalkeeper Laxmikant Kattimani or opt for Naveen Kumar, who also has been quite impressive this season.

While Bengaluru's Indian players are in better form, Goa's game is heavily dependent on their foreigners, especially Corominas, Ahmed Jahouh and Bedia and if they don't play well, Goa tend to suffer.

For Bengaluru, two important players who have the ability to change the course of a game anytime are Miku and the charismatic Sunil Chhetri.

Chhetri has so far netted nine goals and Bengaluru head coach Carles Cuadrat would want him to be at his best and will expect the same from Miku, who has scored five times.

Bengaluru will also have high expectations from winger Udanta Singh, who has so far struck five goals.

They also have an array of strong midfielders and defenders, who will have to be on their toes against an impressive FC Goa attack.

The outfit also has in its ranks India's vastly experienced goalkeeper Gurpreet Singh Sandhu, who has made 59 saves this season. He would be more than keen to maintain a clean sheet, but considering Goa's form it won't be an easy task.