"Arrangements done this year (for Amarnath Yatra) are against the people of Kashmir." 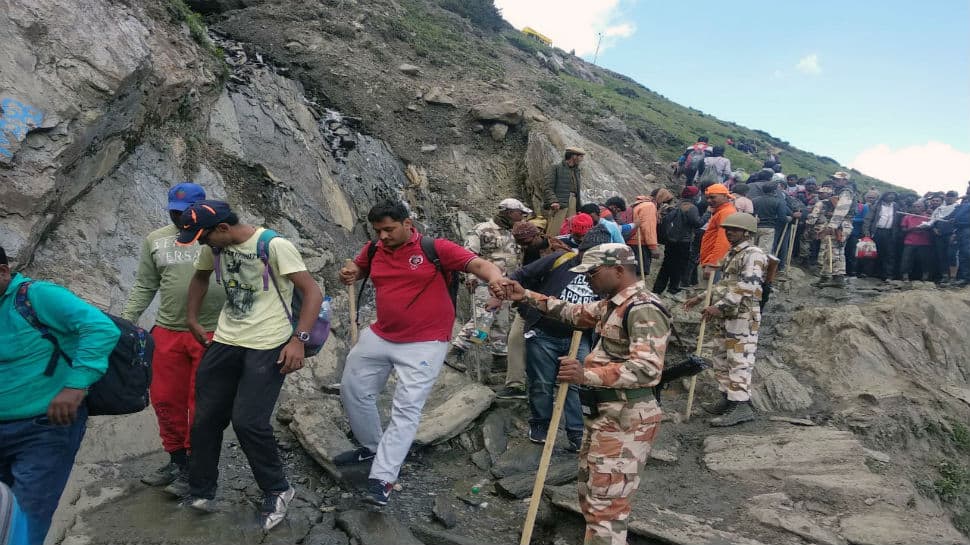 Taking exception to the preparations put into place for the ongoing Amarnath Yatra, former Jammu and Kashmir Chief Minister Mehbooba Mufti said on Sunday that the day-to-day lives of locals are being adversely affected.

The 45-day-long Amarnath Yatra began last week and at least one lakh pilgrims have already made their way to the ancient and holy shrine which is at an elevation of 3,888 metres above sea level. The arrangements put into place for pilgrims has been extremely exhaustive with special focus on security arrangements. While the Central Reserve Police Force (CRPF) and Jammu and Kashmir Police is primarily in-charge for security, personnel from the Indian Army and Border Security Force have also been deployed on the two routes. Mehbooba, however, said that locals are being inconvenienced by the Yatra. "Amarnath Yatra is taking place since years. But unfortunately, the arrangements done this year are against the people of Kashmir. It's causing a lot of trouble in day-to-day lives of local people," she was quoted as saying by news agency ANI.

While she did not elaborate on what specific arrangements are causing the said inconvenience, Mehbooba said she has asked J&K Governor Satya Pal Malik to take note of the matter. "I would like to request the Governor to intervene in this," she said.

Mehbooba's accusation about the arrangements for the Yatra causing inconvenience to locals is likely to cause further friction between her and the Centre. The Bharatiya Janata Party and Mehbooba's Peoples Democratic Party (PDP) were alliance partners in the erstwhile state government before things turned sour and the BJP walked out. The two sides have since taken potshots at each other and Mehbooba's latest charge may well be an extension of this.

While the safety and well-being of pilgrims remain high on the list of priorities during the Amarnath Yatra each year, special care is also taken to ensure locals continue with their daily lives as usual. Their support and collaboration have often been sought and received, making them an integral part of ensuring the success of the Yatra. In return, local businesses also see a spurt in sales during the Yatra.

This year, Shri Amarnath Shrine Board already lauded locals for all the help they have extended.