To commemorate the victory in the Battle of Tololing during the Kargil War, a trekking expedition to Tololing Top was undertaken by the 2 Rajputana Rifles (RAJRIF) on Saturday. 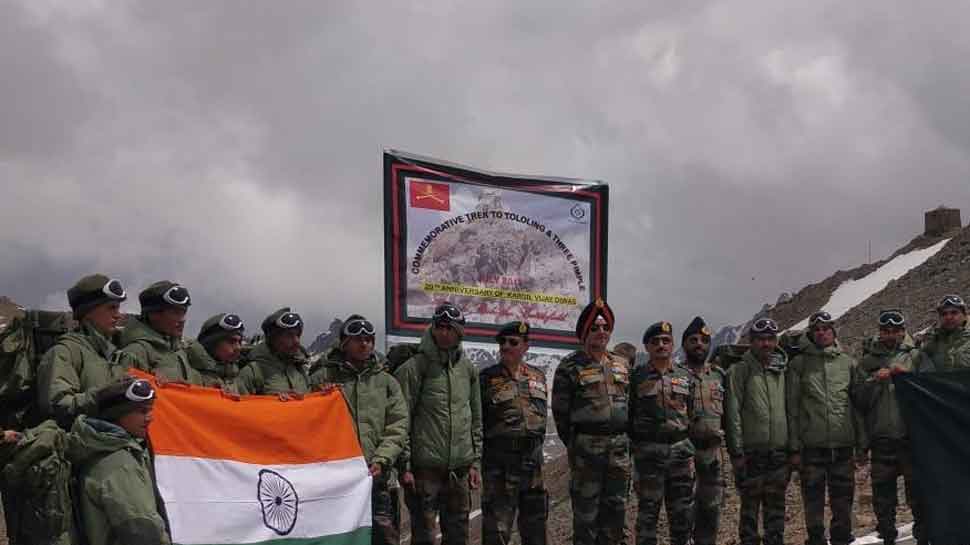 Srinagar: To commemorate the victory in the Battle of Tololing during the Kargil War, a trekking expedition to Tololing Top was undertaken by the 2 Rajputana Rifles (RAJRIF) on Saturday.

The battalion played a significant role during the Kargil War. A trekking expedition to Tololing Top was undertaken by 2 RAJRIF to honour and celebrate the victory achieved 20 years ago amidst harsh terrain and weather conditions.

J&K: A trekking expedition to Tololing Top was undertaken by 2 Rajputana Rifles as a part of 20th anniversary of Kargil War. The Battle of Tololing was a pivotal battle in the Kargil War. The 2 RAJRIF was consisting of One Officer, One Junior Commissioned Officer & 12 Other Ranks pic.twitter.com/yYRkleJwbV

The objective of the trek during these celebrations was to evoke the spirit of patriotism and pay homage to the gallant soldiers of the Kargil War, an official statement said. The battle of Tololing was a turning point in the progress of operations during the Kargil War.

The iconic Tololing feature stands aloft in Drass Sector as a testimony to the sacrifice, grit and perseverance of troops of the Indian Army who were undeterred to recapture this feature occupied by enemy intruders.

The trekking team of the two RAJRIF consisting of One Officer, One Junior Commissioned Officer and twelve Other Ranks were flagged off from Jaisalmer on June 22. After inducting into Leh, the team completed its mandatory acclimatization and necessary preparations by July 3.

The team then set forth on the arduous task of summiting Tololing Top and successfully completed the same today. At the summit, the team was received by Lt Gen Ranbir Singh, General Officer Commanding in Chief of Northern Command.

Singh lauded the efforts of the trekking team and reaffirmed the objective of the trek to foster the spirit of patriotism and pay homage to all gallant soldiers who had fought the Kargil War, the statement said.

In another programme to commemorate the Kargil war, a facilitation function for the locals was organised by the Indian Army at Mushkoh Valley. The event was attended by GoC of Fire and Fury Corps, Lt Gen YK Joshi, a Kargil War veteran himself. Joshi was leading a 13th battalion of Jammu and Kashmir Rifles during the Kargil War.