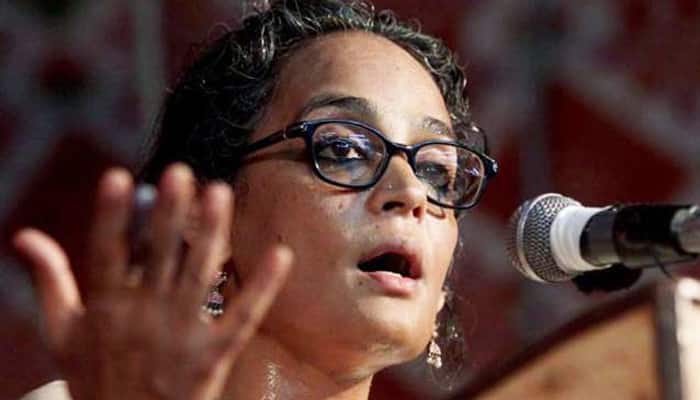 New Delhi: A complaint has been filed against author and activist Arundhati Roy by an advocate at Tilak Marg police station in Delhi on Thursday (December 26) for inciting hatred on religious grounds, abetment of peace. The criminal complaint against MS.Arundati Roy was lodged u/s 295 A/504/153 120 B IPC and other provisions of law.

Earlier on Wednesday, Arundhati Roy addressed anti-CAA protesters at the Delhi University and said, "When the NPR authorities will come to your place for your details, fudge your name. We will decide on five names, such as Ranga Billa, Kung Fu kutta...give your address as 7, Race Course Road."

Attacking the Narendra Modi-led NDA government, the author and activist said the National Population Register (NPR) will serve as a database for the NRC and asked the people to oppose it by giving wrong names and addresses.

BJP leader Uma Bharti had flayed Roy for urging Indians to give wrong names when the government officials ask for data for the National Population Register (NPR).

Uma Bharti in her tweets on Wednesday said, "I am ashamed to take the name of such a woman who idolises people like Ranga-Billa. Her views are not only anti-women, anti-humanity, but also shows a very disgusting mentality."

Former Madhya Pradesh CM Shivraj Singh Chouhan also criticised Roy and said, "If this is the kind of intellectuals we have in this country, then first we should get a register of these people... Arundhati Roy should be ashamed of herself. If such statements are not betraying the nation, what is?"

Notably, Ranga-Billa were two hardcore criminals, who were awarded death for the rape-murder of a young girl and her brother in the 70s.