UP Police have categorically rejected the allegations of manhandling Priyanka Gandhi.

LUCKNOW: The Congress party on Saturday demanded the dismissal of the Yogi Adityanath-led BJP government in Uttar Pradesh after party general secretary Priyanka Gandhi was forcibly stopped from meeting the kin of anti-Citizenship Act protester and allegedly ''manhandled'' by the police in Lucknow.

Addressing a press conference, Congress spokesperson Sushmita Dev said, ''We condemn the physical violence on protesters and manhandling of Priyanka Gandhi Ji. This government should be dismissed and there should be President's Rule in the state.'' The party also later approached the National Human Rights Commission over the incident

A tweet from the Congress' Twitter handle said, ''Priyanka's car was "forcefully stopped" by UP Police while she "was on her way to meet the family members of former IPS officer SR Darapuri".

However, the UP Police categorically rejected the allegations of manhandling Priyanka Gandhi and accused her security officials of not cooperating with them. 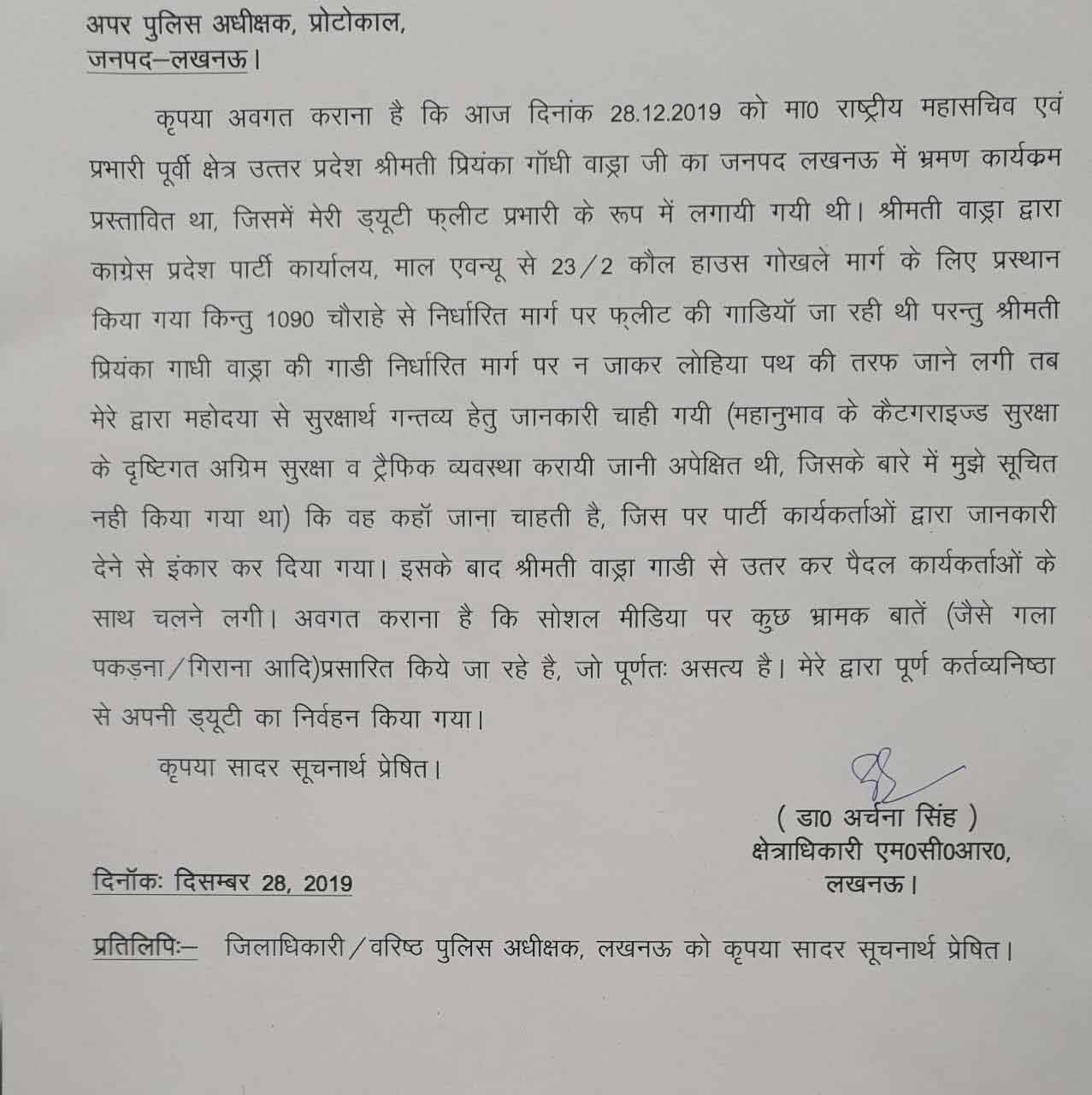 Addressing a press conference, Lucknow SSP Kalanidhi Naithini said, ''Today, morning area in-charge, Dr Archana Singh has presented a report to Additional Superintendent where she has mentioned that Priyanka Gandhi Vadra's car was not moving in the scheduled route rather a different route.'' ''Singh has also written that whatever rumours are doing rounds on social media of heckling and strangulating Priyanka Gandhi Vadra are wrong,'' he added.

All this happened after Priyanka was allegedly stopped by the police at Lohia Path in the UP capital. But she sped away on a scooter, driven by party secretary Dheeraj Gurjar. They were later stopped at the Polytechnic Square, form there she walked to meet former IPS officer SR Darapuri at his residence.

Priyanka later alleged that she was 'manhandled' by the police and "grabbed by the neck for no reason". "The police stopped me while I was going to meet Darapuri`s family. The cops manhandled me. They surrounded me while I was riding pillion on a party worker`s two-wheeler. After that, I walked to Darapuri`s residence."

She was also prevented from meeting the family of Congress worker Sadaf Jafar, who has been arrested over anti-CAA protests.

Earlier during the day, she attended the party`s 135th Foundation Day celebrations, here, and administered the oath of the Preamble of the Constitution to party workers. She asked the party workers to follow the path of great Congress leaders who made the supreme sacrifice for the country and also urged them to oppose all those who attacked the Constitution and its values.

"We are the voice of the last man standing on the edge of society. Love, brotherhood and peace are the facets of truth. We take a pledge to stick to our ideology of non-violence and kindness. We are the Congress," she said. Slamming Prime Minister Narendra Modi for saying that his government never discussed a nationwide National Register of Citizens (NRC), Priyanka Gandhi asserted that the country is now able to recognise his "cowardice."

It may be noted that the state's police has arrested over 1200 people in connection with the violence which erupted in the wake of the protests against CAA across the state.