A chaotic scene greeted Speaker K R Ramesh Kumar as he entered, with the BJP MLAs in the Well of the House. 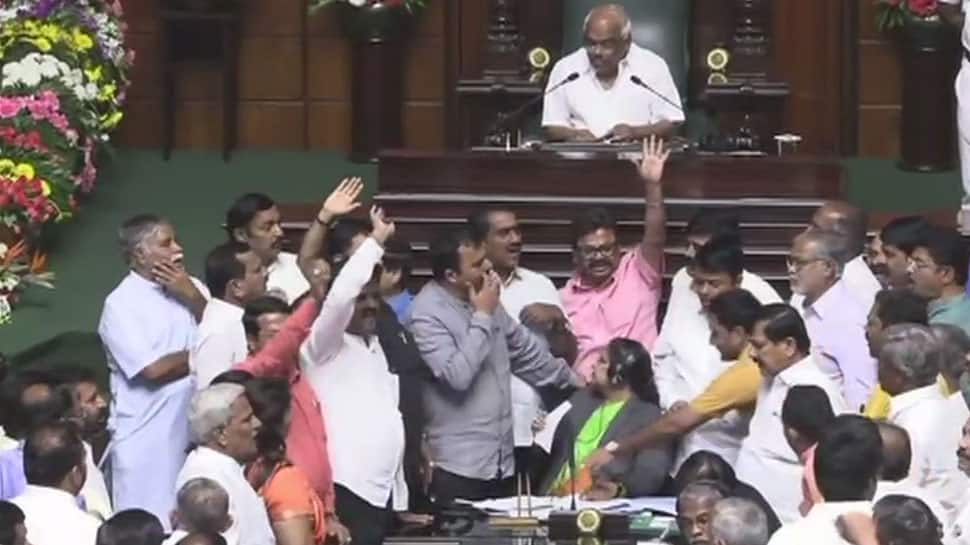 Bengaluru: The Karnataka Assembly was adjourned for the day Thursday as BJP MLAs disrupted proceedings for the second day alleging that the Congress-JD(S) coalition government lacked majority. The nine Congress MLAs, who had skipped the legislature sitting Wednesday, were not present in the House on Thursday as well.

A chaotic scene greeted Speaker K R Ramesh Kumar as he entered, with the BJP MLAs in the Well of the House. Before Kumar could take his seat and start the proceedings, the BJP MLAs raised slogans like, 'Go backCM, Go back CM', 'Step Down CM, Step Down CM', 'Down down government without majority' and 'No unity, no majority'.

The agitating MLAs did not pay heed to the speaker's request that the BJP members resume their seats, prompting him to adjourn the proceedings for 10 minutes. When the House met again, the BJP continued with its protest, forcing the Speaker to adjourn proceedings till 12.30 p.M Friday when Chief Minister H D Kumaraswamy's government will table the 2019-2020 budget.

A similar chaos prevailed in the Karnataka Legislative Council where the BJP members trooped into the Well of the House and raised slogans saying the government has lost majority.

Disgruntled Congress MLAs Umesh Jadhav, Mahesh Kumtalli,Ramesh Jarkiholi and B Nagendra, who are reportedly in touch with the BJP, remained absent for the second day and were incommunicado.

Absconding Congress MLA J N Ganesh, for whom the police are on the lookout for allegedly assaulting fellow lawmaker Anand Singh during a brawl at a resort recently, too was absent. "It is an anti-people government which lacks majorityand hence, it has no right to continue," state senior BJP leader and former deputy chief minister R Ashok told reporters.

Ignoring the whip, nine Congress MLAs had skipped the legislature sitting Wednesday, giving the jitters to the ruling coalition on the opening day of the budget session itself.