“Today, we had to come out here to speak to you (media) as we (Opposition) are not allowed to speak in the Parliament. This is murder of democracy,” said Congress leader Rahul Gandhi. 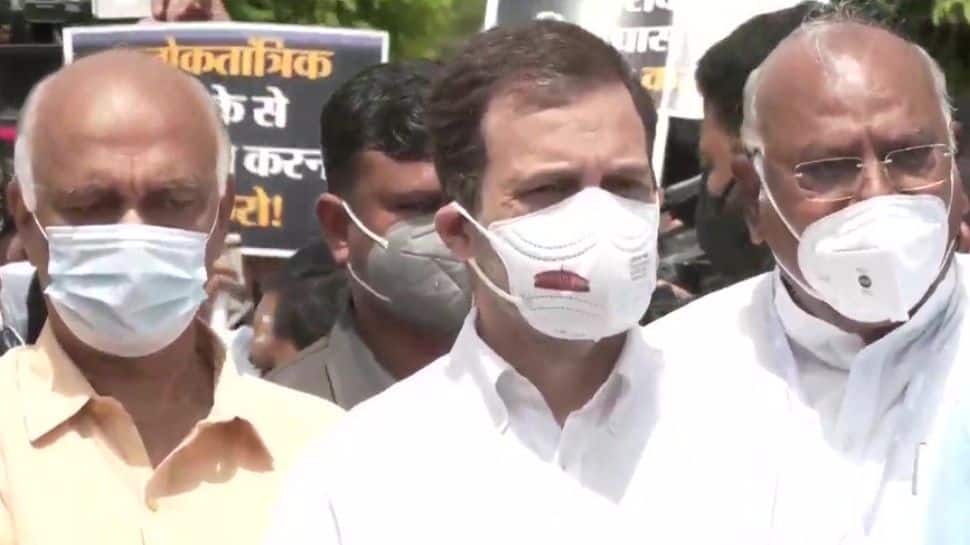 New Delhi: Congress leader Rahul Gandhi and opposition leaders from 15 parties marched towards Vijay Chowk from Parliament in New Delhi on Thursday (August 12, 2021) over the demand to repeal the three farm laws and against chaos in Monsoon Session.

Top leaders of several opposition parties met in the chamber of Leader of Opposition in the Rajya Sabha Mallikarjun Kharge and then walked in protest from Parliament House to Vijay Chowk. The opposition staged protest against numerous issues including the Pegasus report and alleged manhandling of their MPs in Rajya Sabha

“Today, we had to come out here to speak to you (media) as we (Opposition) are not allowed to speak in the Parliament. This is murder of democracy,” said Congress leader Rahul Gandhi.

Recalling the incident at the parliament, Gandhi said, “This is the first time that MPs have been attacked in Parliament. Outsiders were brought in who thrashed the MPs. Even then, they talk about the Chairman’s tears. The Chairman's job is to make the House run.”

Meanwhile other opposition leaders, including Shiv Sena’s Sanjay Raut, also joined the protests. While speaking to the media during the protest march Raut said, “The opposition didn't get a chance to present their views in Parliament. Yesterday's incident against women MPs was against democracy. It felt like we were standing at the Pakistan border.”

“People from outside were brought into Parliament who wore marshal clothes and attacked women MPs. This is murder of democracy every day,” Raut added.

Congress MP Chhaya Verma, who is the Congress Whip said, "I was pushed by male marshals and subsequently I fell on Phulo Devi Netam who fell on the floor in the House while I was trying to make way."

NCP chief Sharad Pawar had said, "In my entire parliamentary career, I never saw the way the women MPs were attacked today in the Upper House. More than 40 men and women were brought into the House from outside. It is very sad and painful, its an attack on democracy."

Congress Chief Whip Jairam Ramesh said, "Insurance Amendment Bill to privatise GIC was passed in RS with a large force of security personnel present. The Govt refused to send it to a Select Committee, a demand by all Opposition parties including those close to the BJP. What happened this evening was worse than atrocious."