The mishap took place during the practice for the Aero Show that begins from Wednesday. 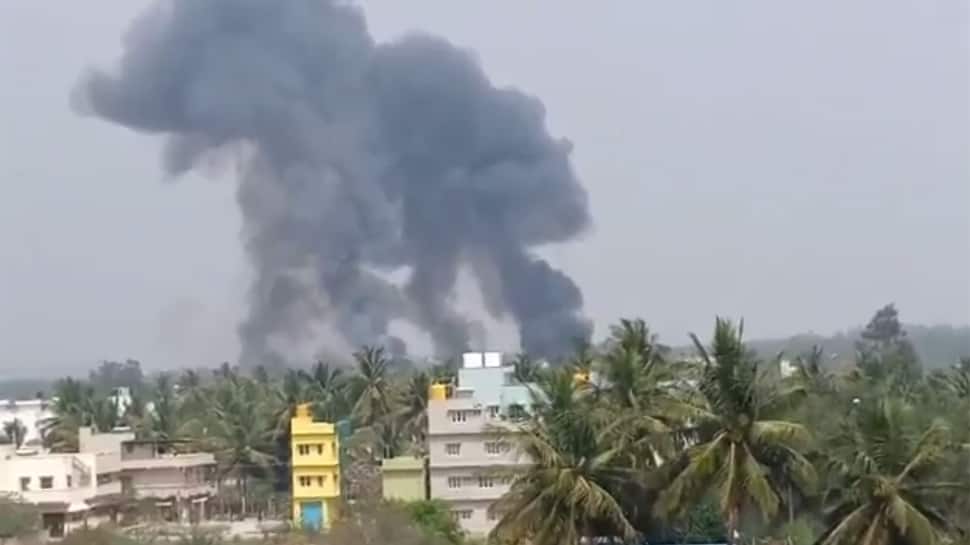 One Indian Air Force pilot lost his life after two aircraft of the Surya Kiran Aerobatics Team (SKAT) on Tuesday collided and crashed at the Yelahanka airbase in Bengaluru. Two other pilots involved in the crash ejected safely.

“Out of the three aircrew of the two aircraft, Wing Commander  Sahil Gandhi died in the crash, while Wing Commander VT Shelke and Squadron Leader T J Singh have been airlifted to Air Force Command Hospital in Bengaluru. The crash took place at 1150 AM at the show venue at Air Force station Yelahanka,” an Air Force spokesperson said.

Bengaluru Police said that one civilian has been injured in the accident. "One Indian Air Force pilot is suspected to have been dead. Two pilots have been injured but are out of danger. Both pilots have ejected, the debris has fallen near ISRO layout, Yelahanka new town area," Director General, Fire and Emergency Services MN Reddi said.

This was the manoeuvre. The upper jet (inverted) was flying with a single pilot. The lower one with both seats occupied. pic.twitter.com/YbMJhOVabc

The mishap took place during the practice for the Aero Show that begins from Wednesday and will continue till February 24.

On February 14, the aerobatics team had shared a video of the practice showing a 'perfectly executed Hidden Split' formations that will be performed at the AeroIndia 2019.

The SKAT was raised in 1996 with Kiran MK–II aircraft. The Team for the first time had carried out a 9 aircraft formation display on 15 August 1998. The SKAT with nine-aircraft formation has performed numerous demonstrations worldwide and is one amongst the renowned public display aerobatic teams. The aerobatic team of IAF has been resurrected with Hawk MK-132 aircraft replacing the Kiran aircraft.

We are #ready, Are you ?#suryakiran #bengaluru pic.twitter.com/8uoYmJSMFz

Aero India Exhibition is organised every two years and has already carved a niche for itself globally as a premier aerospace exhibition, with eleven successful editions organised since 1996. Aero India 2019 will provide a significant platform in bolstering business opportunities in the International aviation sector. A rapidly growing economy and opening up of defence production to the private sector, have given a major fillip to the defence industry in India. It has also become a hub for defence businesses in Asia.

The logo for Aero India 2019 is inspired by the Tejas Light Combat Aircraft (LCA). The Tejas LCA together with its variants is the smallest and lightest Multi-Role Supersonic Fighter Aircraft of its class. This single engine, Compound-Delta-Wing, Tailless Aircraft is designed and developed to meet the diverse needs of the Indian Air Force (IAF) and Indian Navy (IN).

The tri-coloured silhouette of the Tejas LCA with the Ashok Chakra in the centre is the core motif of this logo, reminiscent of the spirit of New India. The defined outlines of the 'A' in Aero is symbolic of a fighter jet while conveying that Aero India is a premier global aerospace exhibition.

The tagline for Aero India 2019, “The Runway to a Billion Opportunities” was created to communicate India’s value proposition in addressing the immense opportunities in the Aerospace and Aviation sectors in India today.  The tagline underlines India’s status as an emerging hub for the global aerospace industry and draws attention to the investment opportunities under Make in India. From the acquisition of 110 multi-role fighter jets and 111 naval utility helicopters to the indigenous development of the light combat helicopter, India’s aerospace sector has crossed an inflection point.

Anyone who picks up gun in J&K will be eliminated unless he surrenders: Army