L&T had in 2017 won the Rs 4,500-crore contract from the Ministry of Defence to supply 100 units of K9 Vajra-T 155 mm/52 calibre tracked self-propelled gun systems to the Indian Army under the Centre's 'Make in India' initiative. 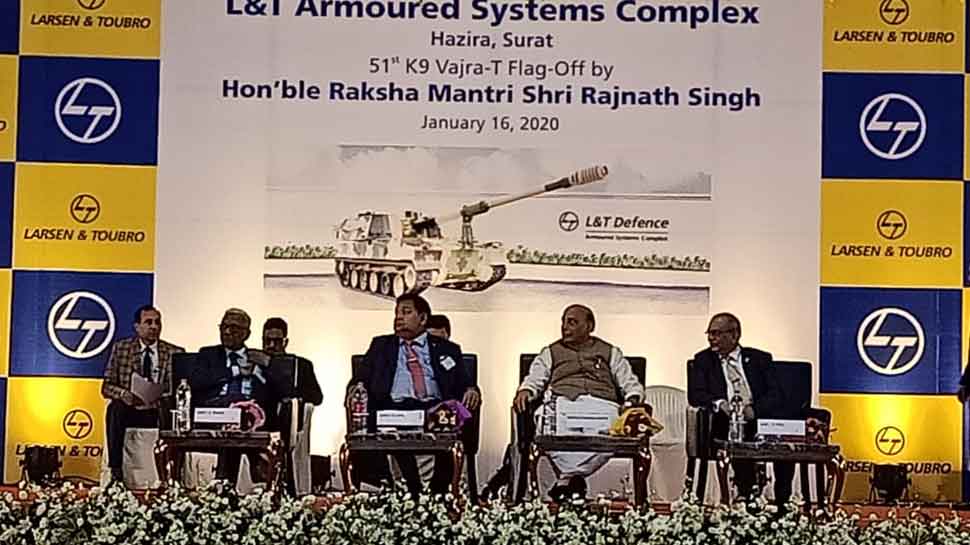 SURAT: Union Defence Minister Rajnath Singh on Thursday flagged off the 51st K-9 Vajra-T gun at the Larsen and Toubro Armoured Systems Complex at Hazira in Gujarat's Surat. The Defence Minister was earlier briefed about the different manoeuvres of the K-9 Vajra-T, a tracked self-propelled howitzer.

The K-9 Vajra-T gun weighs 50 tonnes and can fire 47kg bombs at 43-kilometre distant targets. It can also turn around at zero radius. L&T had in 2017 won the Rs 4,500-crore contract from the Ministry of Defence to supply 100 units of K9 Vajra-T 155 mm/52 calibre tracked self-propelled gun systems to the Indian Army under the Centre's 'Make in India' initiative.

The K9 Vajra contract involves the delivery of 100 such systems in 42 months, which is the largest contract awarded to a private company by the Ministry of Defence.

The Defence Minister also put 'tilak' and drew the auspicious 'Swastik' symbol with kumkum on the new artillery. During the puja, he also offered flowers to the gun and broke a coconut.

Addressing a gathering on the occasion, the Raksha Mantri called for active participation of the private sector in defence manufacturing, reaffirming the government’s commitment to make India an arms manufacturing hub and net defence exporter.

While  Rajnath Singh acknowledged the increasing participation of the private industry in defence production, he stressed that a lot still needs to be done to make India a global defence manufacturing hub. “Our Government is open to new ideas and is determined to use the energy, entrepreneurship spirit and enterprise of the private industry in the defence sector,” Raksha Mantri said.

Singh also listed out various far-reaching reforms introduced by the Government under the ‘Make in India’ initiative to achieve $26 billion defence industry by 2025 and provide employment to 2-3 million people.

“We wish to create an ecosystem that provides a platform to both public sector and private sector to work together and contribute to nation-building through their strengths and experiences,” he added.

He assured that the government will make all efforts to remove any roadblocks and work together to achieve the goal of indigenisation and self-reliance in the defence sector.