Yasin Malik was the mastermind behind the mass purge of Kashmiri Pandits from the Kashmir Valley in 1989 and later years. 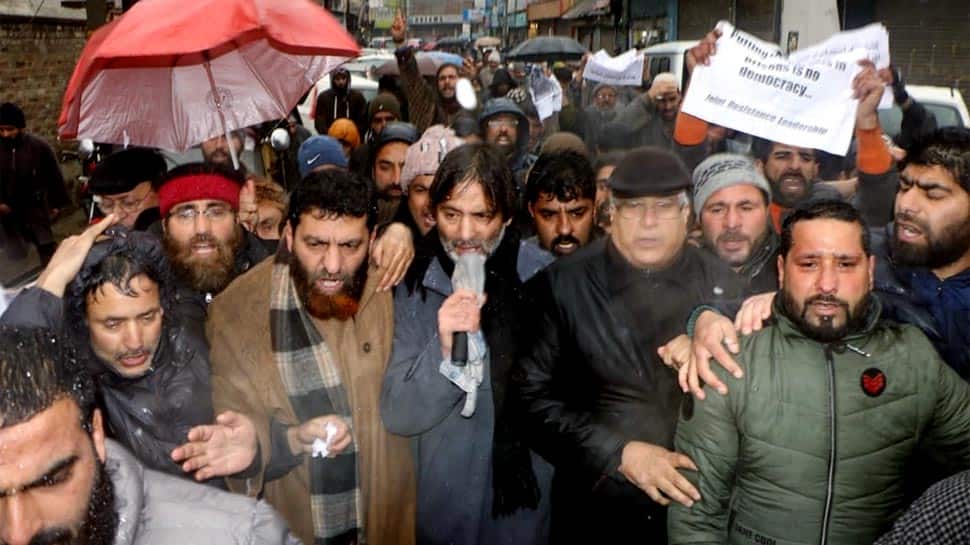 Continuing its strong action against terrorism, the Centre on Friday banned the Yasin Malik-led Jammu Kashmir Liberation Front (JKLF) for promoting secessionism and channelling illegal funds to instigate terrorism in the state.

The development comes exactly a month after the separatist leader's arrest on February 22. The decision to ban JKLF was taken in a meeting of the Cabinet Committee on Security (CCS) chaired by Prime Minister Narendra Modi on March 22, which incidentally also happens to be the Pakistan Day or Pakistan Resolution Day.

Briefing the media, Union Home Secretary Rajiv Gauba recalled how the JKLF was involved in the kidnapping of Mehbooba Mufti's sister Rubaiya Sayeed in December 1989 and the killing of four Indian Air Force personnel, besides several other acts of terror. Gauba also noted JKLF's role in “the exodus of Kashmiri Pandits” from the valley in 1990.

More than 37 FIRs have been registered by the Jammu and Kashmir Police against JKLF, two cases, including the case of the murder of IAF personnel, were registered by CBI. It is also being investigated in several cases by the National Investigation Agency.

Here's the complete statement of the Indian government, explaining in detail why the separatist organisation has been outlawed.

1. Central Government in its pursuit of strong action against terrorism, has today declared JKLF (Yasin faction) as an unlawful association under the provisions of Section 3(1) of the Unlawful Activities (Prevention) Act, 1967.

2. Central Government has followed the policy of ‘Zero Tolerance’ against terrorism and has acted strongly against terrorists.  Securities Forces have been given free hand to deal with terrorism.

3. Government is committed to relentlessly pursuing the policy of curbing the activities of secessionist organizations which are threat to unity and integrity of the country. NIA and Enforcement Directorate are taking strong action against these organizations.

4. With above objective, Government on 28.02.2019 has declared ‘Jamaat-e-Islami (J&K)’ as an unlawful association under the provisions of Section 3(1) of the Unlawful Activities (Prevention) Act, 1967.

5. It was made clear at that time that ‘Jamaat-e-Islami (J&K)’ is separate from ‘Jamaat-e-Islami Hind’.  In 1953, it made its own constitution.  JeI (J&K) is responsible for formation of Hizbul Mujahidin (HM), the biggest terrorist organization active in Jammu & Kashmir. JeI (J&K) has been providing all kind of support to HM in terms of recruits, funding, shelter, logistics, etc

6. Jammu & Kashmir Liberation Front led by Md. Yasin Malik has spearheaded the separatist ideology in the valley and has been at the forefront of separatist activities and violence since 1988. Murders of Kashmiri Pandits by JKLF in 1989 triggered their exodus from the valley. Md. Yasin Malik was the mastermind behind the purging of Kashmiri Pandits from the Kashmir valley and is responsible for their genocide.

7. JKLF has many serious cases registered against it. This organisation is responsible for murder of 4 Indian Air Force personnel and kidnapping of Dr. Rubaiya Sayeed (daughter of the then Home Minister Mufti Mohammad Sayeed in Shri V. P. Singh’s Government). This organization, alongside, is also responsible for illegal funneling of funds for fomenting terrorism.  JKLF is actively involved in raising of funds and its distribution to Hurriyat cadres and stone-pelters to fuel unrest in the Kashmir valley as well as for subversive activities.

8. Activities of JKLF (Y) pose a serious threat to the security of the country and are prejudicial to the territorial integrity and sovereignty of India. The organization has been actively and continuously encouraging, feelings of enmity and hatred against the lawfully established Government as well as armed rebellion.

9. 37 FIRs have been registered by J&K Police against JKLF. Two cases including the case of murder of IAF personnel were registered by CBI.  NIA has also registered a case, which is under investigation. It is evident from these that JKLF continues to be actively engaged in supporting and inciting secessionism and terrorism including terror financing.

10. A large number of secessionist leaders were being provided security by the State. Government, after review, has withdrawn the security of many such persons.  This process will continue further.

11. The Government has re-vitalized grass-root democracy in J&K by conducting elections peacefully for the first time in 2018 for Urban Local bodies after 2005 and for Panchayats after 2011.  There was active participation of the people in these elections and overall polling percentage was 74%.  More than 3,652 Sarpanches and 23,629 Panches were elected in these elections. Panchayats have been empowered and made more accountable towards public.  Direct elections were held for Sarpanches.  Financial powers of Panchayats have been increased 10 times.  About 20 Departments have been brought under Panchayati Raj.  Government is committed for integrated and coordinated development of all the three regions of the State, Jammu, Kashmir and Ladakh.