If Priyanka Gandhi is an ace, then Rahul is the joker: BJP MP Saroj Pandey

Taking a jibe at the Congress, the BJP MP said that Priyanka's children should also join politics. 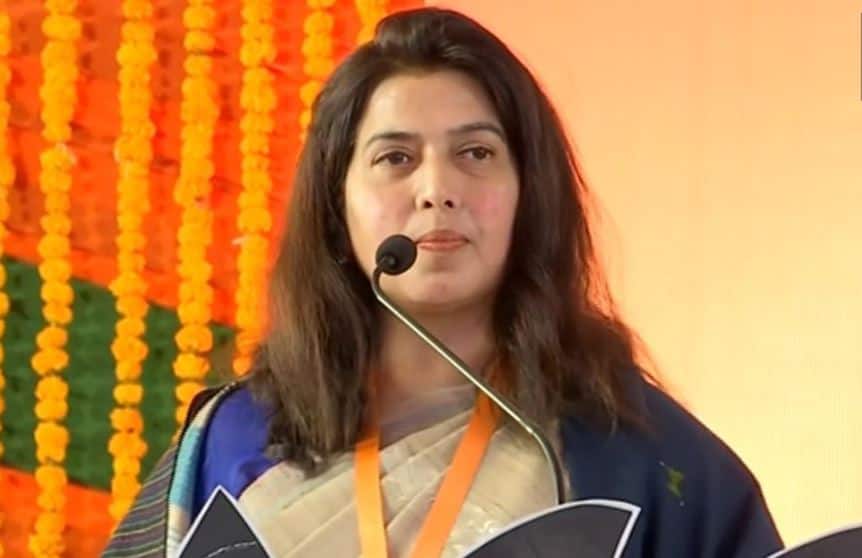 NEW DELHI: BJP MP Saroj Pandey on Monday took a dig at the Congress President Rahul Gandhi, saying that if Priyanka Gandhi is an ace [card] for the Congress, then it means that they were playing with the joker so far. Pandey also remarked that the Congress failed to find one woman worker from within the party who could be a General Secretary and this is the reason they have appointed a homely woman from Gandhi family as the General Secretary, referring to Priyanka Gandhi.

BJP MP Saroj Pandey: Congress couldn't find a woman worker in their so many years who could be a General Secretary? What they found is a homely woman from Gandhi family. They call her an ace, so this means they were playing with a joker till now. pic.twitter.com/Jf53VZgDY4

The BJP MP claimed that a Congress leader from MP recently said that the party has a beautiful face like Priyanka. Taking a jibe at the Congress, the BJP MP said that Priyanka's children should also join politics and the Congress should appoint Priyanka's husband Robert Vadra as the treasurer of the party.

It may be recalled that Priyanka Gandhi Vadra was appointed as Congress' general secretary for eastern Uttar Pradesh by Raqhul Gandhi on January 23. Priyanka's appointment is seen as an important step by the Congress ahead of the Lok Sabha poll because Prime Minister Narendra Modi and Uttar Pradesh Chief Minister Yogi Adityanath's constituencies fall in eastern UP.

"I am very happy that my sister Priyanka will assist me in Uttar Pradesh in the Lok Sabha polls, she is very capable," Rahul Gandhi had said after Priyanka's appointment.

It is expected that Priyanka will take charge of her position in the Congress on February 4. Congress sources claim that both Priyanka and Rahul are going to visit Kumbh Mela in Prayagraj on February 4 to take a holy dip before Priyanka's formal entry into the political arena.

Shiv Sena plays hardball in alliance talks with BJP, says it is the big brother