Rahul submitted the documents to the District Collector who is also the Returning Officer for the election. 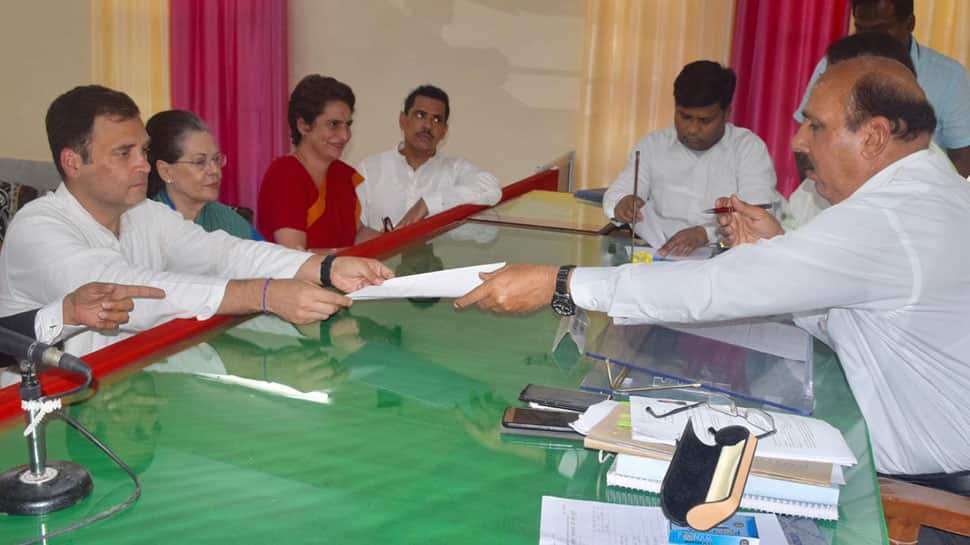 Seeking a fourth term as a Lok Sabha MP, Congress president Rahul Gandhi on Wednesday filed his nomination from the Amethi constituency in Uttar Pradesh. Accompanied by his sister Priyanka Gandhi Vadra, brother-in-law Robert Vadra and mother Sonia Gandhi, Rahul submitted the documents to the District Collector who is also the Returning Officer for the election.

Amethi will vote on May 6 in the fifth phase of the Lok Sabha election along with 50 other constituencies spread across seven states.

Rahul, Priyanka and Robert Vadra held a roadshow before the former filed his nomination papers. Raihan and Miraya, the son and daughter of Priyank and Robert, were also present on the open truck during the roadshow.

The roadshow took place in Munshiganj with the cavalcade passing through Vishal Mega Mart, Bachpan school and ending at the collector's office. Sonia Gandhi was not present during the roadshow and reached the District Collector`s office directly.

Rahul's main rival is Bharatiya Janata Party leader Smriti Irani who had lost to him by over 1 lakh votes in the 2014 Lok Sabha election. Rahul has been winning from Amethi since 2004. The Samajwadi Party-Bahujan Samaj Party-Rashtriya Lok Dal alliance has not fielded any candidate from Amethi, making its a direct fight between Rahul Gandhi and Smriti Irani.

Facing a tough contest, Rahul is also contesting from Kerala's Wayanad Lok Sabha seat where voting is on April 23 in the third phase along with 115 other constituencies in 14 states. He filed his nomination from Wayanad on April 4.