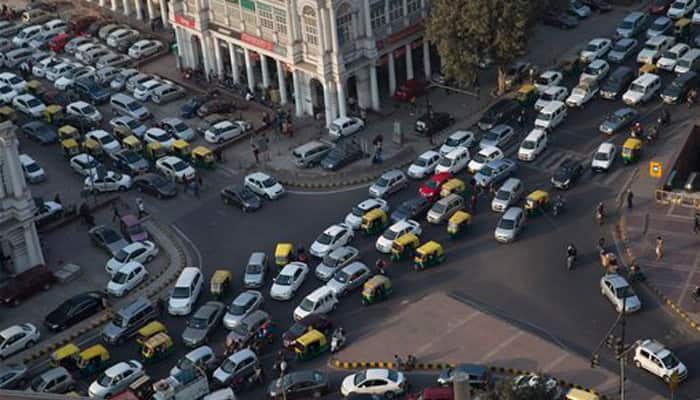 New Delhi: The Aam Aadmi Party-led Delhi government, Friday, implemented its ambitious odd-even scheme on the roads of the national capital in a bid to combat air pollution.

Under this 8 am-8 pm scheme, movement of private cars will be restricted on the roads of the national capital for 15 days. Those not abiding the rule would be fined Rs 2,000.

As there was less traffic, Chief Minister Arvind Kejriwal, who shared his car with Transport Minister Gopal Rai and PWD Minister Satyendar Jain to reach the Delhi Secretariat, hoped that the plan would be successful.

"Hello Delhi! Ready for odd-even? We shall overcome," he tweeted.

He later told reporters: "I am truly overwhelmed by the response we have received so far. There are very less even-numbered cars on the roads. The plan seems to have been successful."

He said the people of Delhi accepted the scheme "whole-heartedly", adding "I am confident that in next five years people will show the way to rest of the country".

Delhi has done it! Reports so far v encouraging. Delhiites! U give me hope that U are capable of achieving big challenges

Delhi Tourism Minister Kapil Mishra reached the Secretariat riding his two-wheeler at around 9 am and tweeted, "Wow Delhi Thank you for making #OddEvenFormula a success...just reached office on bike.. no traffic.. Delhi is following it voluntarily."

Although the city police assured full commitment to its enforcement, vehicles with even numbers could be seen plying on roads after 8 am. A few unlucky even-numbered cars were also challaned in the morning with the first violator fined at ITO.

Thousands of volunteers took to the streets as the clock ticked eight to assist traffic police in enforcing the pilot plan that will stay in force in the national capital till January 15.

A display board installed in front of Delhi Secretariat put the real-time figures of suspended particulate matter PM 2.5 and PM 10 at 360 and 480 micrograms per cubic metre, respectively, at 9.30 am, several times above the safe limits.

The respective safety limits are 60 and 100 micrograms for the two and prolonged exposure to anything beyond that can harm the respiratory system. Air quality is considered 'severe' by Indian authorities when the level of PM 2.5 breaches the 250-mark.

We will ensure full implementation of odd-even scheme: Bassi