The rare reproductive behavior of frogs was discovered by professor SD Biju and his team from Delhi University. 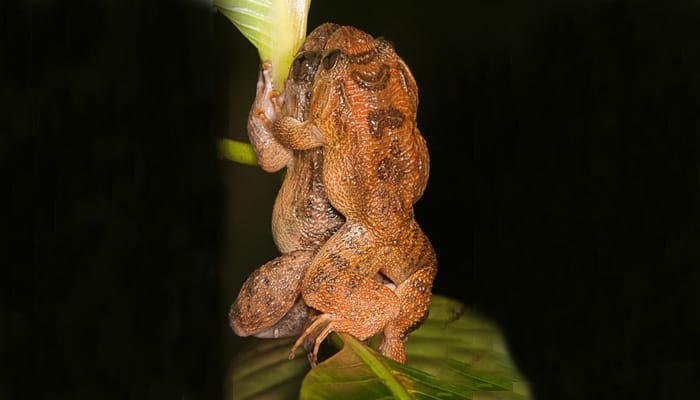 New Delhi: A new, unique mating position called the 'dorsal straddle' has been discovered in a species of frog - Bombay night frogs (Nyctibatrachus humayuni) - endemic to the Western Ghats of Maharashtra, India.

Till date, nearly 7000 species of frogs and toads found worldwide mate in one of the six mating positions (amplexus), which involve mostly the male grabbing the female around the waist or under the armpits.

However, the new mating behavior, which scientists described as the seventh type, enables the male and female get close enough so that his sperm fertilizes as many of her eggs as possible.

The rare reproductive behavior was discovered by professor SD Biju and his team from Delhi University.

According to Professor Bihu said, unlike other fro species, the male does not embrace the female but straddles over her back with his hands holding or resting on substrates such as a leaf, branch or tree trunk.

Another strange thing about the Bombay night frog is that the male releases his sperm over the female's back instead of releasing near the female's cloaca. After that, the female lays her eggs, which are then fertilised by the sperm trickling down her back.

Interestingly, females of the Bombay night frog give mating calls during rainy season.

Bombay night frogs mate only during monsoon season nights, and only in the vegetation overhanging flooded forest streams in the Western Ghats. This made fieldwork a 'very challenging experience,' Biju said.

Check out the team's video below -

Before coming out with these findings, the team spent 8 hours a night for about 40 nights between 2010 and 2012 during the monsoon season in the Western Ghats, documenting the Bombay night frog nightlife.

The findings have been published in the journal PeerJ on June 14, 2016 by a team of scientists from University of Delhi, NCBS, Bangalore and the University of Minnesota, USA.

Must watch – Koko, the gorilla who talks to humans!