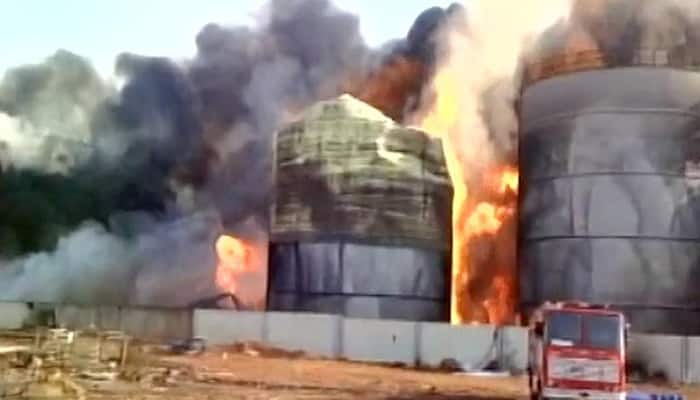 Visakhapatnam District Collector N Yuvaraj, who was at the accident site, told PTI that nearly 40 fire fighting engines from Navy, Visakhapatnam Steel Plant, and Port Trust were making all efforts to put out the fire, that erupted at the Bioxmax Fuels Ltd company premises in Duvvada area here at around 7.30 PM yesterday.

No casualties were reported in the incident so far, he said, adding that the blaze occurred in the storage area and no worker was present in close proximity of the mishap site.

Biomax Fuels Ltd has a manufacturing capacity of five lakh tonnes of bio-diesel from multi-feedstock at VSEZ.

The Collector said out of 18 storage tanks located at the site, 12 caught fire. It is expected to be brought under control by this evening as the entire oil in
the tanks has to burn completely, he said.

The authorities are taking steps to avoid the fire from spreading to six other tanks which are there in the same area, he said.

District Fire Officer J M Rao said they were yet to ascertain the cause of the massive blaze.

As the flames spread rapidly from one tank to another within minutes, the fire tenders were unable to reach the storage area, he said.

Meanwhile, the Eastern Naval Command in a statement said that nine fire tenders of Indian Navy were deployed at the Biomax company to douse the flames.

"On getting news from the state administration, the Eastern Naval Command launched two aircraft for aerial reconnaissance and assessment of the extent of fire. Navy's Quick Reaction Team (QRT) and an ambulance with medical team were rushed to the site of the fire accident along with the fire tenders," it said.

Standby arrangements have been made at the Naval hospital, INHS Kalyani, for providing assistance in case of medical emergency, it said.

Fire tenders are being replenished and turned around. Additional fire tenders are kept on standby for deployment, the release added. (With PTI inputs)