Tension has been brewing ar the National Institute of Technology (NIT) campus in Jammu and Kashmir since the India-West Indies T-20 World Cup match last month. 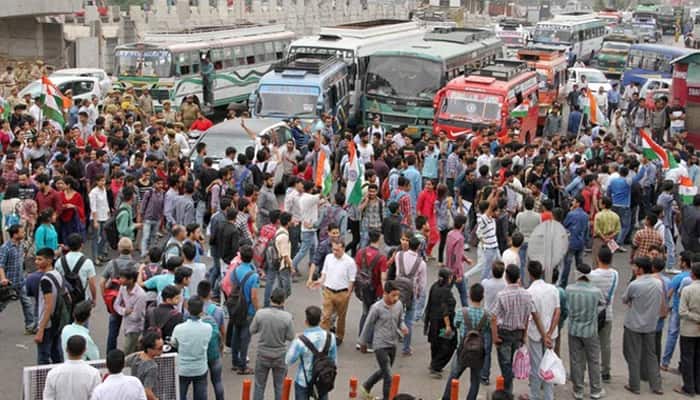 Srinagar: In a shocking revelation, female students at the National Institute of Technology (NIT) campus in Jammu and Kashmir have alleged that Kashmiris threatened them with abuse and violence.

Tension has been brewing in the NIT since the India-West Indies T-20 World Cup match last month.

Narrating the ordeal, a student said: “Local Kashmiri students are threatening us - outstation girl students - with rape and molestation. Yesterday, a group of Kashmiri students walked up to me and said: ‘Ek ke saath rape hoga toh sab thande pad jaoge’ (If one of you gets raped, the rest will fall silent).”

“God was kind that no girl was present when the Jammu and Kashmir Police brutally assaulted the non-Kashmiri male students on Monday. Had there been girls, they too would have been thrashed like the boys. Why did the police and the college administration treat us like animals?,” Mail Today quoted the student as saying.

Central paramilitary troopers were deployed at the campus on Tuesday night after hundreds of non-Kashmiri students accused the Jammu and Kashmir Police of kicking and punching them when they wanted to march out on roads shouting pro-India slogans.

According to witnesses in the campus, local students had been cheering for the West Indies while the non-locals were supporting Team India. As Andre Russel of the West Indies hit the winning runs, crackers were burst in the vicinity, if not within the campus, to celebrate the victory of the Caribbeans.

This pitched non-locals students, whose number is around 1,500, against locals in the college. A day after the cricket match, non-Kashmiri students held demonstrations shouting slogans like "Bharat Mata Ki Jai", "Hindustan zindabad" and "Pakistan murdabad". Local students also gathered and raised pro-freedom and anti-India slogans.

Sensing trouble, the campus management suspended classes till April 4. But on Tuesday, a group of 500 non-local students took out a procession inside the campus, carrying the Tricolour and shouting "Bharat Mata Ki Jai".

Police at the campus gates prevented the students from marching out. The protesting students alleged they were beaten up and police personnel even entered the campus and thrashed some of their handicapped colleagues. Police accused the protestors of indulging in stone pelting, an allegation they denied.

The Jammu and Kashmir government has ordered an inquiry into the incident.