PKL 2019, Tamil Thalaivas vs Telugu Titans: As it happened

Tamil Thalaivas defeated Telugu Titans 39-26 in the fourth match of the Pro Kabaddi League 2019 at the Gachibowli Indoor Stadium in Hyderabad. 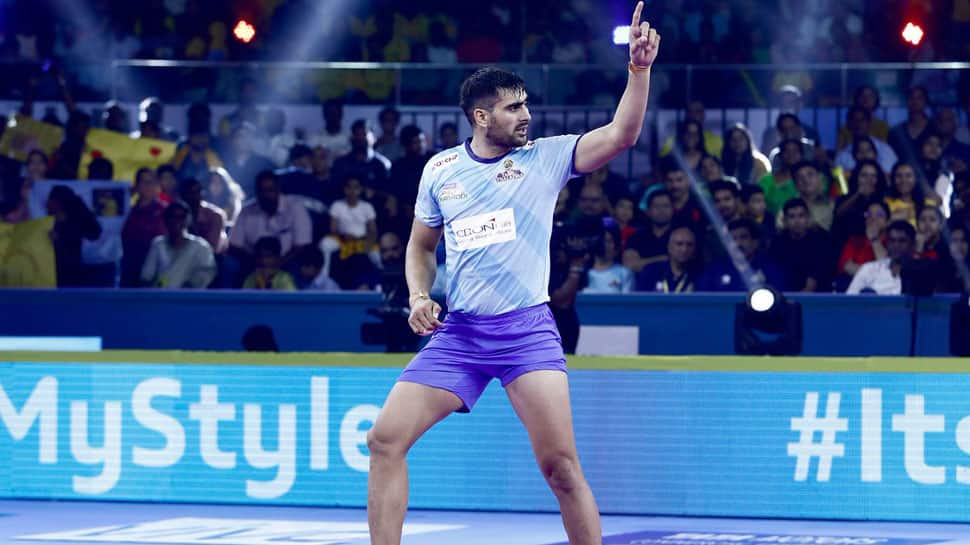 Ajay Thakur-led Tamil Thalaivas defeated Telugu Titans 39-26 in the fourth match of the Pro Kabaddi League 2019 at the Gachibowli Indoor Stadium in Hyderabad on Sunday.

# The Tamil Thalaivas have defeated Telugu Titans 39-26 in the fourth match of the Pro Kabaddi League 2019, following an excellent show by Manjeet Chillar, Ajay Thakur and Rahul Chaudhari.

There is no stopping this man!

# Seven and a half minutes left for the end of the second half as the Tamil Thalaivas lead 28-17 over Telugu Titans with a maiden win in sight for the outfit on the back of a commanding performance by Manjeet Chillar, Ajay Thakur and Rahul Chaudhuri!

# The scoreline reads 25-17 in favour of the Tamil Thalaivas as Manjeet Chillar who has been the star of the clash so far brings all his experience into play to pull off an ankle grab!

# Tamil Thalaivas 21-13 Telugu Titans as Siddharth Desari strikes for the Telugu Titans following an excellent ankle hold, with 16 minutes left for the end of the second half!

# The second half starts!

HALF TIME ' | Rahul has been the star man so far as we are leading with a hefty 10 points at the interval. #IdhuNammaAatam #HYDvCHE #VIVOProKabaddi pic.twitter.com/9ZUGMximTW

# Tamil Thalaivas 19-10 Telugu Titans as Ajay Thakur fails to pull off a super raid with nearly one minute left for the end of the second half following an excellent performance by the Titans defence!

# Shabeer makes his presence felt with an excellent raid resulting in two points for the Tamil Thalaivas. The scoreline reads 16-8 in favour of the Telugu Titans with three minutes left on the clock for the end of the first half!

# Just six minutes left on the clock as Tamil Thalaivas lead 11-6 against the Telugu Titans following a fine super tackle by Manjeet Chillar, resulting in a lead for the Thalaivas!

# The Thalaivas continue to lead in the clash with the scoreline reading 5-4 in their favour. However, the Telugu Titans have improved following a slow start, as Ajay Thakur and Shabeer Bappu fail to grab points in two raids.

# The Thalaivas hold a 4-3 lead over the Telugu Titans following a tackle by the Thalaivas which is challenged by the Titans, resulting in defender Ran Singh moving to the bench instead of Rajnish.

# The Tamil Thalaivas have extended their lead to 4-1 as Rajnish joins Siddharth Desai on the bench following a tackle by the former!

# Rahul Chaudhuri strikes yet again with an excellent ankle hold on Siddharth Desai as the scoreline reads 2-1 in favour of the Tamil Thalaivas!

Rahul gets the first point of the match with a bonus point.

# Here is the Tamil Thalaivas starting seven for the clash!

The moment you've been waiting for!

# The Telugu Titans have won four matches against the Tamil Thalaivas while the latter have registered two wins against the Hyderabad-based franchise!

# The clash is set to start in less than three minutes as Siddharth Desai looks to make his presence felt for the Telugu Titans!

Hosts Telugu Titans take on Ajay Thakur-led Tamil Thalaivas in the second clash of Sunday's double-header at the Gachibowli Indoor Stadium, Hyderabad following their defeat in the opening clash of the Pro Kabaddi League 2019 against U Mumba.

The hosts were overly reliant on star raider Siddharth Desai who failed to make his presence felt. The raider finished the clash with just five points after picking his first point of the clash in the 33rd minute.

The Tamil Thalaivas enjoy a sturdy defence having signed the likes of Ran Singh, Mohit Chhillar with Manjeet Chhillar the man in focus from the left cover position. Siddharth will be looking to make amends for an underwhelming show in the opening clash, but will certainly need to push himself to make his presence felt.

Another interesting face-off will be between Tamil Thalaivas' newly signed star raider Rahul Chaudhari and his ex-team Telugu Titans' who he represented in the previous six editions of the PKL.

Chaudhari was one of the top performers for the Telegu Titans' in the previous editions of the tournament and it will certainly be interesting to witness how he plans the downfall of his previous franchise.

Team India captain Ajay Thakur is currently leading the Tamil Thalaivas, having led the franchise for three consecutive seasons. Thakur has accumulated 426 points in 44 matches across two seasons making him a threat for any opposition.

PKL 2019, Gujarat Fortune Giants vs Bengaluru Bulls: As it happened