The actor's powerful performance in epic saga 'Baahubali' and won many hearts.

New Delhi: South superstar Rana Daggubati has a huge fan following and recently when he shared a picture on Instagram which was part of a brand promotion, it left netizens worried.

Wondering why? Well, Rana has undergone a massive weight loss transformation and his concerned fans wanna know if all's well with his health. Check out the picture and some fan reactions:

Who says a man's lifestyle is affordable? Especially when you’re a Millennial. But I’ve now got a clear winner for life, #HDFCBankMillennia - A card that pays you to spend. So that football night with friends and lots of pizza? You’re In. Those Shoes? You’re Buying Them. To get your HDFC Bank Millennia Card DM @hdfcbank, cause it’s your life…#SpendItWell Powered by @mastercardindia 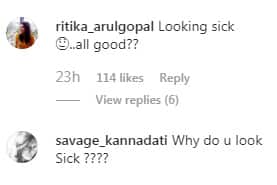 The actor's powerful performance in epic saga 'Baahubali' and won many hearts. He was lauded for playing Bhallaladeva's role brilliantly on-screen.

On the work front, Rana has several projects in his kitty. He has movies like Haathi Mere Saathi, Hiranya Kashyap, Madai Thiranthu / 1945, Enai Noki Paayum Thota, Virataparvam 1992 in the pipeline.

Also, he will be seen in multi-starrer comedy 'Housefull 4' which is the fourth installment of superhit franchise 'Housefull'. Rana will be seen playing a military officer in Bhuj: The Pride of India.