Aryan, who is dressed in all-black in the photos, is seen cosying up with a girl and happily posing for the clicks. The duo look cute together and Aryan, as usual, is flaunting his intense expression. 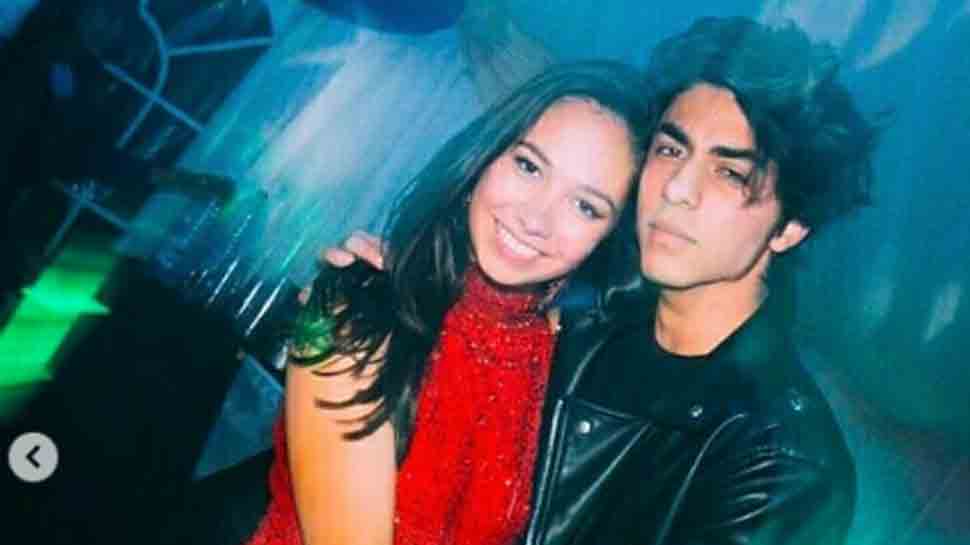 New Delhi: Bollywood superstar Shah Rukh Khan and his son Aryan Khan recently took over the internet with their impressive voice-over in the Hindi version of Disney's 'The Lion King'. While Shah Rukh gave his voice to Musafa, Aryan dubbed for Simba. The father-son's first-time collaboration led their fans go crazy who flooded the internet saying how they sound alike.

More recently, Aryan was in the news after reports of the actor dating a London based blogger surfaced and while there has been no confirmation of this yet, we got our hands on few pictures of the star kid partying with a mystery girl. Aryan, who is dressed in all-black in the photos, is seen cosying up with a girl and happily posing for the clicks. The girl is seen in a red top and black shorts and is flashing her big wide smile.

The duo looked absolutely cute with each other in the picture, which has broken the internet once again and has gone viral.

Baby, I'm dancing in the dark with you between my arms _ Barefoot on the grass, listening to our favorite song _ #Aryankhan

As soon as the picture surfaced on social media, his fans started contemplating if that the girl is the London based blogger Aryan is dating currently.

According to a report in Mumbai Mirror, Aryan is said to have been in a relationship with a girl he met in London, where he had been studying for past few months. The report also claimed that Aryan's mother Gauri Khan had also met the girl.

The 21-year-old is a spitting image of his dad and enjoys a huge fanbase even before he has made his debut as an actor. The actor is a social media sensation as his pictures go viral within minutes they pop on social media.

Buzz is also there that Aryan is all set to make his entry into the film fraternity soon. Reports suggest that the young star is being considered for a role in director Gunasekhar's ambitious project 'Hiranyakashipu'. The project is touted as the next big southern marvel after the blockbuster 'Baahubali' franchise.

According to in.com, the film also stars Prabhas and Rana Daggubati, who will be set against each other. Daggubati will be seen playing the role of Hiranyakashipu. Anushka Shetty and Tamannaah will be female leads whereas Aryan has been approached to play the role of Pralhad.

However, any confirmation on the same remains awaited.