Khaleel Ahmed picked up 4/41 for India. 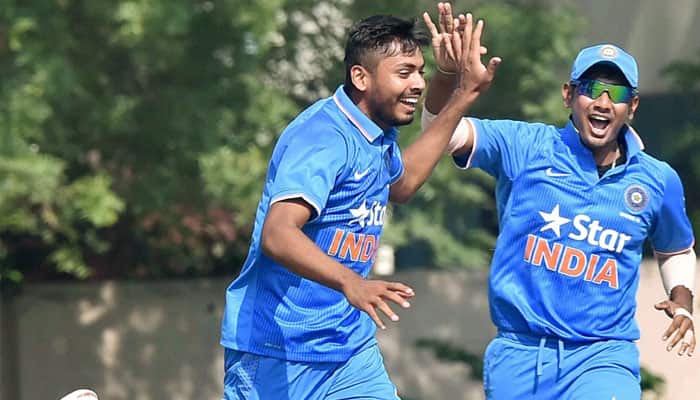 Kolkata: The Indian Under-19 cricket team registered their second successive win in the tri-series as they beat Afghanistan by 33 runs at the Jadavpur University ground here on Saturday.

With the win, India now have nine points from two games. Rashid Arman top scored for the visitors with 43 while Khaleel Ahmed picked up 4/41 for India. Chasing India's total of 236, the visitors could only manage 203 in 47.3 overs.

The Indian bowlers could not make early in-roads in the first few overs as openers Janat Ihasanullah (25) and Zazai Hazratullah (21) knit a partnership of 45 runs but then the latter fell to Ahmed.

Ahmed struck again to get rid of Nasir Khan (0). There were three more quick wickets for India which left Afghanistan struggling at 65/5.

Later for the eighth wicket, Arman and Mohammad Sardar (33) put up a partnership of 62 runs, studded with some delightful boundaries and massive sixes, threatening to take the game away from the hosts but then both fell in quick succession to hand the match to the hosts.

Earlier in the day, India opener Rishab Pant's 87 propelled the home team to register a fighting total on the board after opting to bat.

Pant en route hit 10 fours and two sixes. But the Indians had to suffer an early jolt as Washington Sundar made his way to the pavilion after scoring just two.

But the likes of A.N. Khare (24) and captain Ricky Bhui (27) contributed in the middle-order to help India's cause of getting past the 100-run mark.

Afghanistan struck back with the crucial wicket of Bhui but Anmolpreet Singh (16) and Mahipal Lomror (43), who was one of the eight changes that India made from their last game, ensured they carried on the good work of their predecessors.

In the concluding overs, wickets fell in a heap with the last four batsmen scoring in single digits.