Switzerland’s goalless record in the knockout stages continues for the fourth time in a row. Sweden, on the other hand, will face the winner of England vs Colombia match in the quarterfinals. 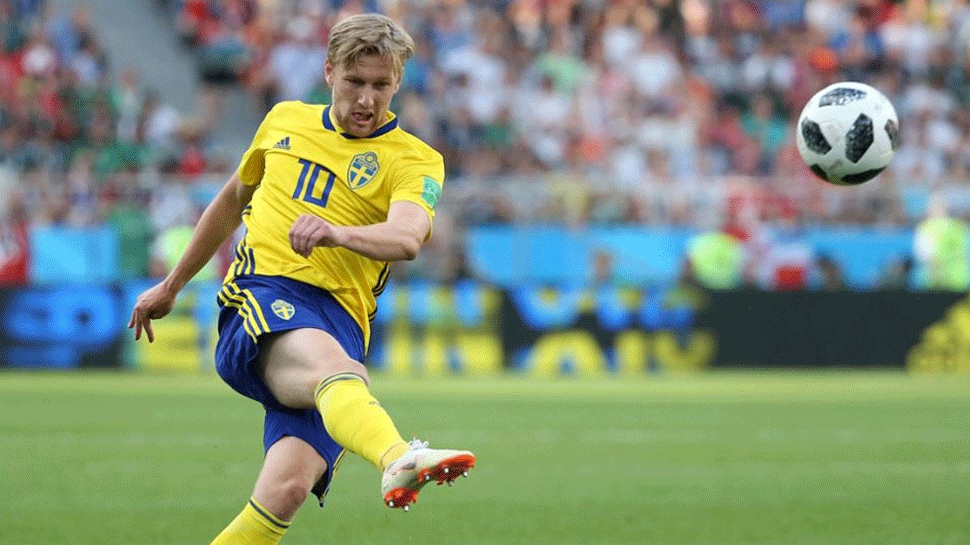 Moscow: Sweden beat Switzerland 1-0 after Emil Forsberg scored off a deflection to take Sweden through to the quarterfinals, for the first time since 1994. Both teams had their chances but Switzerland failed to capitalise in the final third. Shaqiri did manage to create space outside the box but could not get past the Sweden defence. Switzerland’s goalless record in the knockout stages continues for the fourth time in a row. Sweden, on the other hand, will face the winner of England vs Colombia match in the quarterfinals.

90+4 minute: Referee checks for a potential penalty after Switzerland's Michael Lang brings down Martin Olsson. NO Penalty! But Michael Lang gets a RED CARD. Free-kick to Sweden.

90+2 minute: Xherdan Shaqiri makes a spirited run on the right flank but his shot gets blocked by a Sweden defender.

82 minute: Substitution for Sweden. Emil Forsberg is replaced by Martin Olsson. Emil Krafth is in for Mikael Lustig.

79 minute: Xherdan Shaqiri curls the ball in the middle, a Sweden defender attempts to head the ball towards his own goal but Emil Forsberg blocks it right outside the goal.

78 minute: Switzerland's Breel Embolo makes a promising run but fails to capitalise as a Sweden defender kicks the ball away. Corner for Switzerland.

77 minute: Corner for Sweden. Emil Forsberg whips the ball in the middle but a Swiss defender clears the ball away.

68 minute: Yellow card! Granit Xhaka gets booked for a challenge.

66 minute: GOAL!!! Emil Forsberg fires the ball from distance and the ball finds its way into the Switzerland net off a deflection from Manuel Akanji. Sweden take the lead.

63 minute: Free-kick to Sweden. Behrami brings down Emil Forsberg outside the Switzerland penalty box. This could be dangerous. Forsberg fails to get past the Swiss defence. Goal-kick.

61 minute: Yellow card! Switzerland's Valon Behrami gets booked for a foul. If Switzerland win today, Behrami will miss the quarterfinals.

59 minute: Sweden waste another move in the final third. Both teams have looked flat up front with miscued attempts off the target.

52 minute: Corner for Switzerland. Xherdan Shaqiri curls the ball in from the right flank but the goalkeeper tips it away.

49 minute: MISS!!! Sweden's Ola Toivonen waits for the ball to drop as he attempts a half-volley but the clouds the ball away from the Swiss goal. That was close.

47 minute: Free-kick to Sweden. Ludwig Augustinsson fires the ball in the Swiss penalty box but Manuel Akanji clears the ball to safety.

The two other Round of 16 matches between European teams (#ESPRUS and #CRODEN) were both decided by penalties...

Do you reckon that is on the cards today?#SWESUI 0-0 pic.twitter.com/VNnpJwHlsI

45 minute:  Free-kick to Switzerland. Xherdan Shaqiri whips the ball into the Sweden box but goalkeeper Robin Olsen collects it comfortably.

41 minute: Corner for Sweden. MISS!!  Albin Ekdal misses a golden opportunity off a cross from the far corner. Both Sweden and Switzerland need to make the most of their chances up-front.

39 minute: MISS!! Switzerland's Blerim Dzemaili goes unmarked as he picks up a pass in the box but skies the ball away. Dzemaili should have scored there.

36 minute: Corner for Switzerland. The Sweden defence clear the ball away from danger.

34 minute: Switzerland's Granit Xhaka attempts a long range but clouds the ball away. That was close.

29 minute: SAVED!! Goalkeeper Yann Sommer makes a brilliant save off a half-volley shot from Sweden's Marcus Berg. What an effort.

24 minute:  Switzerland's Xherdan Shaqiri fires the ball in the Sweden box in an attempt to find Zuber but skies the ball away.

15 minute:  Sweden are pressing hard in the midfield forcing Switzerland to defend deep early in the first-half. The Swiss, on the other hand, are trying to create chances on the counter but give away possession in the final third.

7 minute:  Switzerland's Steven Zuber attempts a shot from distance but hits the ball directly into the hands of the goalkeeper. Decent effort.

1 minute: Free-kick to Sweden. Augustinsson whips the ball in the middle but a Swiss defender clears the ball to safety.

Sweden's best show was in the 1958 edition, which they hosted, they were the runner-up to Brazil. Sweden have reached the semifinals in 1938, 1950 and 1994 too. Switzerland have managed to reach the quarterfinal on four occasions - 1934, 1938 and 1954. Since then they have promised a lot but delivered very little.

The match in Saint Petersburg is the first time the two teams are facing each other in a major tournament although they have met 29 times in competitive matches with Switzerland winning 11, Sweden 10 and the remaining eight matches ending in a tie.

Possession no longer the law for achieving World Cup success