The Indian men's team continued their winning streak by clinching the fifth Kabaddi World Cup title, while the women's side bagged the crown for the fourth consecutive time, here on Friday. 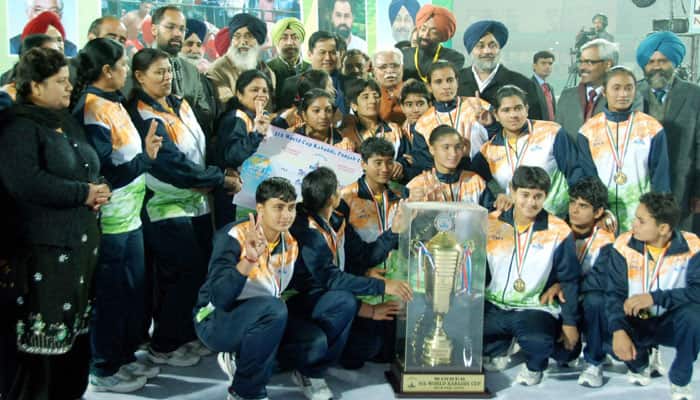 Badal, Muktsar: The Indian men's team continued their winning streak by clinching the fifth Kabaddi World Cup title, while the women's side bagged the crown for the fourth consecutive time, here on Friday.

At a grand finale held at Guru Gobind Singh Multipurpose Stadium, the Indian men's team defeated Pakistan 45-42 for the fourth time, while the women team beat New Zealand 36-27 for the second time in a row.

History repeated itself as both teams in the men and women sections had clashed during the finals of Fourth Kabaddi World Cup at Ludhiana last year and in both the matches, India had emerged victorious.

The men's finals between India and Pakistan was always going to be a close contest and it turned out to be one as is evident from the scoreline.

It was raiders Sandeep Singh Surakhpur (16) and Sandeep Luddar (10) who were the top scorers, while stopper Yadwinder Singh Yada "Surakhpur" also registered 5 points and Gopi secured 3 points respectively to help India's cause.

In the women's final, the Indian eves started on a positive note and lead right from the beginning. Their dominating performance helped them to lead 18-14 at the half time.

In women's section, the best raiders were Ram Bateri and

Priyanka, while best stopper was Anu Rani. They were awarded with a cash prize of Rs 1 lakh each.

New Zealand raider Lani Perese and stopper Tito were also awarded with a special cash prize of Rs 1 lakh each.

The best raiders of men section are Sandeep Surakhpur (India) and Shafiq Ahmad Chishti (Pakistan) and best stopper was Yadwinder. They were awarded with Preet Tractors each.

In this event, 11 teams in men section and eight teams in the women section had participated.