Nadal had claimed the year-end top spot in the ATP rankings when Novak Djokovic slumped to 7-6 (4), 4-6, 5-7 defeat at the hands of Federer in a match that lasted over two hours and 52 minutes. 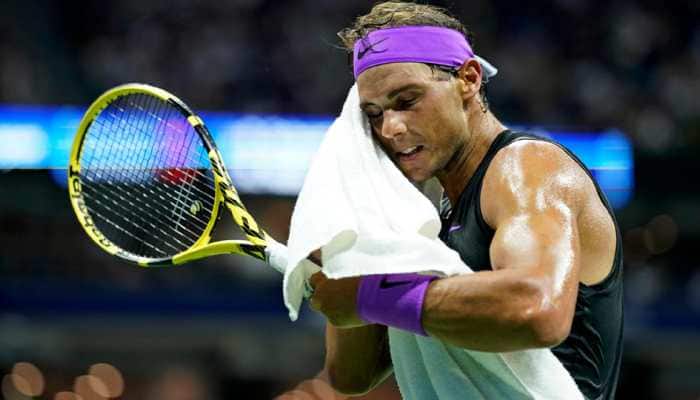 Spanish tennis maestro Rafael Nadal produced a spirited performance as he bounced back from a set down to outclass Greek tennis sensation Stefanos Tsitsipas in the last Group Andre Agassi clash of the ATP Finals at the O2 Arena in London on Friday.

The 33-year-old, who has already clinched the year-end No.1 spot in the Association for Tennis Professionals (ATP) rankings, lost the opening set by a narrow margin before he rebounded strongly to seal a 6-7(4), 6-4, 7-5 triumph over Tsitsipas in a clash that lasted two hours and 52 minutes.

In the opening set, the two players remained equal till 4-4 before Tsitsipas clinched a mini-break after Nadal smashed a backhand into the net. The Greek tennis sensation eventually clinched the set with an ace two points later.

The Spaniard won the first pair of break points of the match at 2-2 in the second set. However, he failed to convert the same. Nadal then bounced back to even the score at 4-4 before he produced 11 winners to just six unforced errors to clinch the set.

In the third and deciding set, Nadal grabbed two break points with a backhand volley to level the score at 2-2. The Greek then saved another break point at 3-3 with a big first serve before the Spaniard held serve at 6-5 to eventually emerge victorious.

Nadal finished the match with a total of 38 winners to 30 unforced errors. He also didn't offer a break point to Tsitsipas throughout the clash, the ATP official website reported.

The 19-time Grand Slam champion needed Russian tennis star Daniil Medvedev to beat Alexander Zverev in another match of the group in order to make it to the semi-final of the season finale tournament. Zverev, however, went on to seal a solid 6-4, 7-6 (4) win against the Russian.

Zverer will now lock horns with Dominic Thiem in the semi-finals, while Tsitsipas will face 20-time Grand Slam champion Roger Federer in other last-four clash.

Earlier, Nadal had claimed the year-end top spot in the ATP rankings when Novak Djokovic slumped to 7-6 (4), 4-6, 5-7 defeat at the hands of Federer in a match that lasted over two hours and 52 minutes.