Washington: US President Joe Biden has claimed that his predecessor Donald Trump has left him a "very generous" letter in the Oval Office before departing the White House. It is customary for outgoing Presidents to write their successors a letter and leave it for them on the Resolute Desk in the Oval Office.

However, given that the former president broke several of the past traditions, including by opting to skip Biden's inauguration ceremony and never formally congratulated him on his election win, it was unclear until Wednesday whether Trump would maintain the tradition of outgoing presidents leaving notes for their successors.

"The President wrote a very generous letter. Because it was private, I will not talk about it until I talk to him. But it was generous," Biden told reporters in the Oval Office of the White House on Wednesday.

The President said that he plans to talk to Trump. In her maiden news briefing on Wednesday night, White House Press Secretary Jen Psaki told reporters that she was with Biden when he was reading the letter in the Oval Office right before he signed the executive actions.

However, she declined to offer more details on the letter, saying,  it "was private, as he (Biden) said to you all". "It was both generous and gracious, and it was just a reflection of him not planning to release the letter unilaterally, but I wouldn't take it as an indication of a pending call with the former president," Psaki said.

However, another letter, believed to be written by Trump to Biden, is circulating on the social media platform, which has evoked sharp reactions from the netizens. The letter dated January 20, 2021, which bears the signature of the outgoing US president reads “Joe, you know I won.’’ 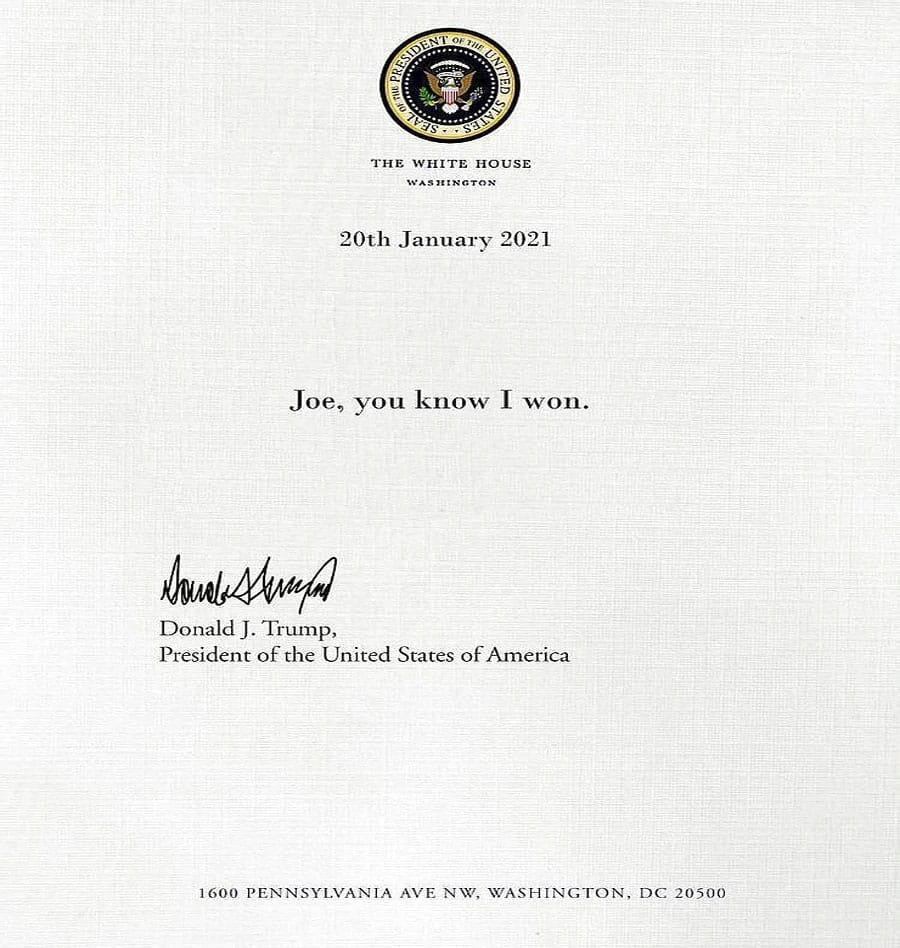 The authenticity of the letter believed to be written by Donal Trump can’t be confirmed. Meanwhile, a blogpost has claimed that this letter was actually written by Donald Trump, who left it for Joe Biden.

However, many fact-checking sites say that the viral letter is fake. The claim that the seal and the signature on the letter do not match the official seal used by President Trump.

Biden took the presidential oath on Wednesday, administered by US Chief Justice John Roberts, with his left hand resting atop a 5-inch heirloom Bible that has been in his family for a century. Later in the day, Biden attended a wreath-laying ceremony at the Tomb of the Unknown Soldier in Arlington National Cemetery in Virginia, accompanied by Obama, Bush and Clinton.

Afterwards, his motorcade joined an abbreviated parade on his way to the White House. Biden and his family left their limousines on Pennsylvania Avenue to walk the final few hundred yards to their new home. "It feels like I`m going home," Biden said when asked about returning to the White House.

In her first briefing for reporters, White House spokeswoman Jen Psaki said Biden`s first telephone conversation with a foreign leader would be with Canadian Prime Minister Justin Trudeau on Friday. They will discuss Biden`s decision to revoke the permit needed to build the Keystone XL oil pipeline and other bilateral issues, she said.

Biden`s inauguration as the 46th president was the zenith of a five-decade career in public service that included more than three decades in the US Senate and two terms as vice president under Obama. At 78, he is the oldest US president in history.

He faces calamities that would challenge even the most experienced politician. The pandemic reached a pair of grim milestones on Trump`s final full day in office on Tuesday, reaching 400,000 U.S. deaths and 24 million infections - the highest of any country. Millions of Americans are out of work because of pandemic-related shutdowns and restrictions.

Biden`s top priority is a USD 1.9 trillion plan that would enhance jobless benefits and provide direct cash payments to households to alleviate the financial pain from coronavirus.

Will repair our alliances: Joe Biden's message to world after taking oath as US president