Trump administration showed the extent of the devastation as neighbourhoods were burnt to the ground. 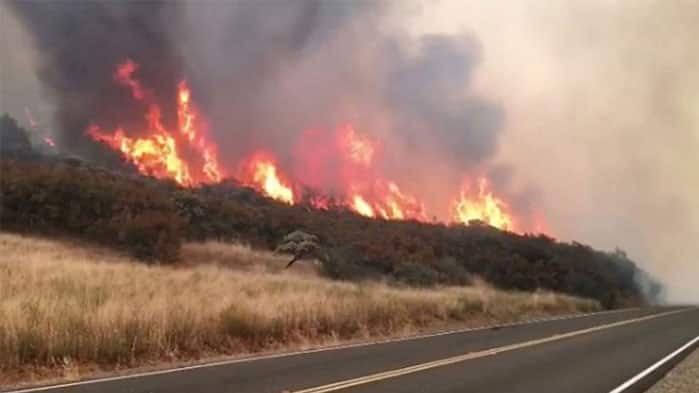 CALIFORNIA: United States President Donald Trump reached California to survey the ruins left behind by the state's most destructive wildfires to date on Saturday, as 76 people were reported dead due to the fires.

"This is very sad to see, but we're all going to work together," The Washington Post quoted Trump as saying.

Pictures posted by officials from the Trump administration showed the extent of the devastation as neighbourhoods were burnt to the ground.

"Total devastation in Paradise, CA. Truly heartbreaking but so powerful to see the strength of the people here. President @realDonaldTrump stood w/ @JerryBrownGov, @GavinNewsom, and Mayor Jody Jones to say we are with you and working together to help," White House Press Secretary Sarah Sanders tweeted.

"As far as the lives are concerned, nobody knows quite yet. We`re up to a certain number, but we have got a lot of people that aren`t accounted for yet. Right now we want to take care of the people who are so badly hurt," Trump mentioned while underscoring the loss of lives that the fires have caused.

Trump and Majority leader Kevin McCarthy met with firefighters, state and local officials who are working round the clock to contain the fire which is estimated to be fully contained by November 30, according to cooperating authorities.

During his trip, Trump repeatedly mentioned that the federal government is offering full support to California during the state`s response to the wildfires, making a demise from his earlier statements where he threatened to cut off federal funding to the state due to "poor forest management".

"President Trump issued Major Disaster and Emergency Declarations to provide support for California`s response to these wildfires. The declarations cover up to 75 per cent of costs incurred by California for removing debris, conducting emergency activities, providing transitional sheltering, and more," a statement issued by the White House noted while outlining all the steps taken by the President to help the state.

With McCarthy, Governor of California Jerry Brown, Governor-elect of California Gavin Newsom in tow, Trump discussed ways to work together to help the people of California with press onboard Air Force One as the entourage heads towards Malibu from Paradise.

Massive wildfires spread through the state of California a week ago, causing large-scale destruction and forcing hundreds of thousands of Californian residents to abandon their homes and escape, including Hollywood celebrities like Lady Gaga and Miley Cyrus.