The rains have inundated 3371 villages and affected 34 lakh people in 28 of the total 33 districts in the state. 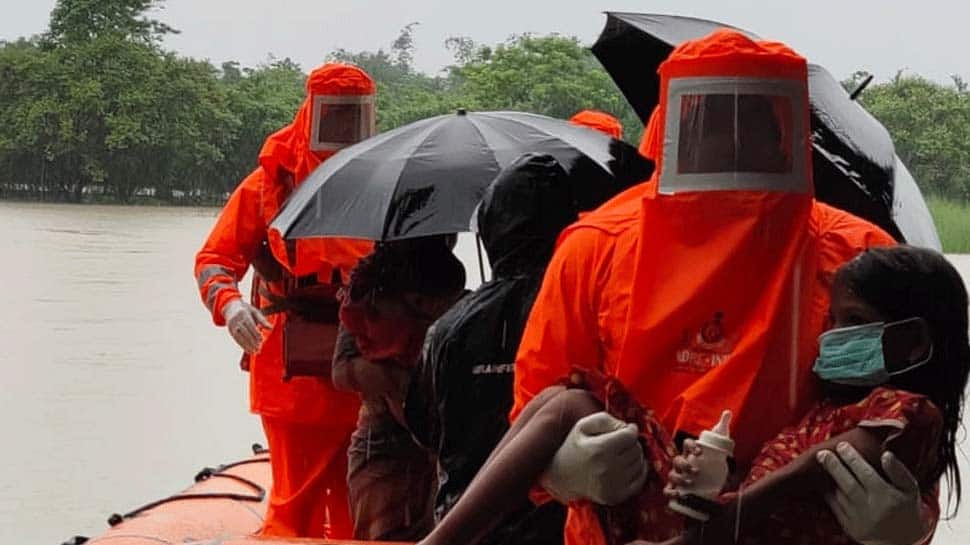 Heavy monsoon rains over the past few weeks have led to massive flooding in Assam with the death toll rising to 61 on Wednesday. The rains have inundated 3371 villages and affected 34 lakh people in 28 of the total 33 districts in the state. A total of 44,000 people have been evacuated and shifted to 500 shelter homes.

Of the 28 districts affected the worst hit are Barpeta, Dhubri and Morigaon. The Brahmaputra River is flowing above the danger level at multiple locations in Guwahati, Dibrugarh, Dhubri, Goalpara, Jorhat, Lakhimpur, Nagaon, Kamrup, Barpeta, Hailakandi, Karimganj and Sonitpur districts.

The floodwaters have submerged 1.28 lakh hectares of crop area in the affected districts.

Flood in different parts of Assam inundated large swathes of land in Kaziranga National Park, a World Heritage site, killing at least 51 wild animals though 102 animals have been rescued, news agency IANS reported on July 14. Officials told IANS that many tigers and rhinos had strayed into the nearby villages due to flooding of their habitats.

Officials of the Kaziranga National Park and the Assam State Disaster Management Authority (ASDMA) said 95 per cent of the national park`s 430 sq km area was now flooded, with traffic movement on the National Highway-37 near Kaziranga now suspended. According to the officials, 45 hog deer, three wild boars and one rhino, one wild buffalo and a swamp deer perished in the floodwater. Of the rescued animals, 86 were hog deer.

Park Director P. Sivakumar said that rising water level in the park areas had forced three sub-adult tigers to stray into a goat-shed in Kandolimari village and nearby areas. "Two of the tigers have already been driven back into the parking area and efforts are on to locate the third tiger," Sivakumar told IANS over the phone.

Formed in 1908, the Kaziranga National park, a UNESCO World Heritage site since 1985, is home to more than 2,200 one-horned Indian rhinoceros, approximately two-thirds of the total world population.

Each year, the monsoon floods inundate the National Park, located on the edge of the Eastern Himalayan biodiversity hotspots of Golaghat and Nagaon district, forcing a large number of the wild animals to leave the park and head towards the nearby hills in Karbi Anglong district by crossing National Highway-37 that passes near the park`s boundary.

According to the officials, 45 animals, mostly hog deer, were injured due to flood and one by vehicle hit. Of the 223 camps of forest personnel guarding the park, 173 have been inundated and 14 others vacated due to rising water levels.