Addressing a political rally in Daltonganj, Palamu, Prime Minister Modi also launched a veiled attack on the alliance of Congress, Jharkhand Mukti Morcha (JMM) and Rashtriya Janata Dal (RJD) and said that their only agenda was to misuse the resources of the state. 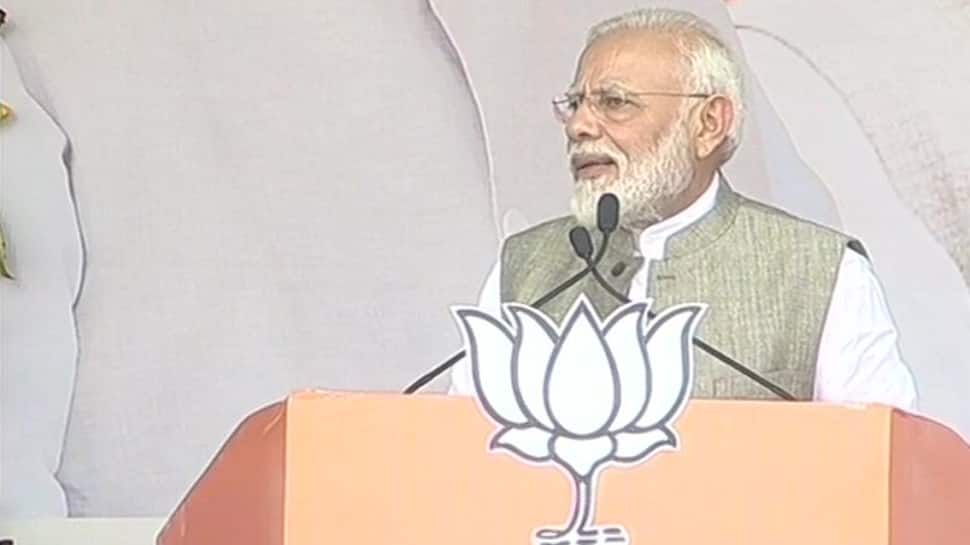 Daltonganj: Prime Minister Narendra Modi on Monday said that BJP has made efforts to free Jharkhand off Naxals and create a peaceful environment in the state. Addressing a political rally in Daltonganj, Palamu, Prime Minister Modi also launched a veiled attack on the alliance of Congress, Jharkhand Mukti Morcha (JMM) and Rashtriya Janata Dal (RJD) and said that their only agenda was to misuse the resources of the state.

"In Jharkhand, governments were formed through back channels because of the vested interests of some political parties. These people have no feeling to serve people of the state. The only agenda of their alliance is `Satta bhog` and misusing resources of Jharkhand. They are again misleading you on this and seeking vote from you," he said while addressing the rally." They always have eyes on resources. Those people took benefit of political instability and did politics on violence," he said.

The Prime Minister also reiterated Central government`s commitment to ensure that every family gets their own house by 2022. "Every poor family is getting their pucca houses. Those who did not get houses till now, I want to assure them that the work is going on. We will give houses to every family by 2022," he said.

PM Modi said that BJP provided a stable government in the state and gave a corruption-free government to the state. "Jharkhand, especially Palamu, has always been a strong fortress for BJP. If lotus is blooming across the country today, it`s due to the blessings of the people here and the party workers. The people here have always stood by `kamal`. BJP has made an effort to free Jharkhand off naxals and create a peaceful environment here," he said.

"In the last five years, BJP worked on five things--Stability, Sushan, prosperity, respect and security. Under the leadership of BJP, it is very important for Jharkhand that a strong and stable government is formed here. BJP worked to eliminate corruption," the Prime Minister added. Jharkhand will go to polls in five phases from November 30.

In 2014, the BJP, which won 43 seats, formed the government along with All Jharkhand Students` Union (AJSU), which had won five seats, under the leadership of Raghubar Das.