The inducted council of ministers were six-time Ambala (Cantonment) legislator Anil Vij, who was Health Minister in the previous government; former Speaker and three-time Legislator Kanwar Pal, and BJP`s Banwari Lal, who was previously a minister of state. 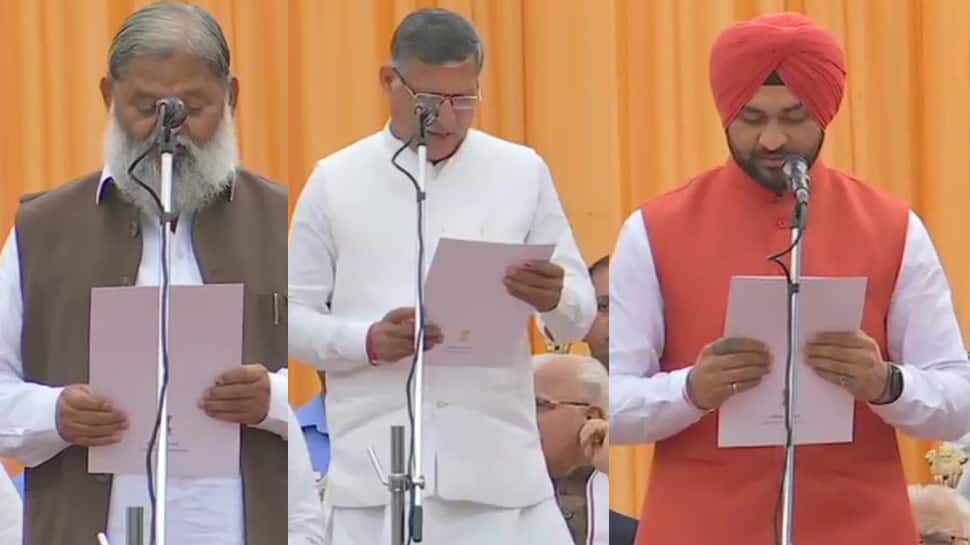 The Haryana Cabinet of Chief Minister Manohar Lal Khattar was expanded on Thursday with Governor Satyadev Narayan Arya administering oath of office to ten ministers at the Raj Bhawan. There will be six cabinet and four state ministers, comprising one from its alliance partner, a lone woman and an Independent.

The inducted council of ministers were six-time Ambala (Cantonment) legislator Anil Vij, who was Health Minister in the previous government; former Speaker and three-time Legislator Kanwar Pal, and BJP`s Banwari Lal, who was previously a minister of state.

The other Cabinet ministers from the BJP quota were two-time Legislator Mool Chand Sharma and first-timer JP Dalal. The lone woman in the cabinet is BJP`s Kamlesh Dhanda, who belongs to the Jat community that comprises 28 per cent of the state`s population. JJP`s Anoop Dhanak was inducted as the Minister of State along with Om Prakash Yadav.

The lone Independent who got the Cabinet berth was Ranjit Singh. BJP`s first-time Legislator and former Indian hockey captain Sandeep Singh, who produced incredible flicks, has been inducted into the government as a Minister.

Both Khattar and Dushyant took the oath of office on October 27. The polls were held on October 21 and the results declared on October 24. The BJP won 40 seats with six short of a majority in the 90-member Assembly. Besides the 10 JJP legislators, seven independent MLAs have also extended support to the BJP, helping it reach a tally of 57 seats. The Congress won 31 seats, improving its tally from 19 in 2014.