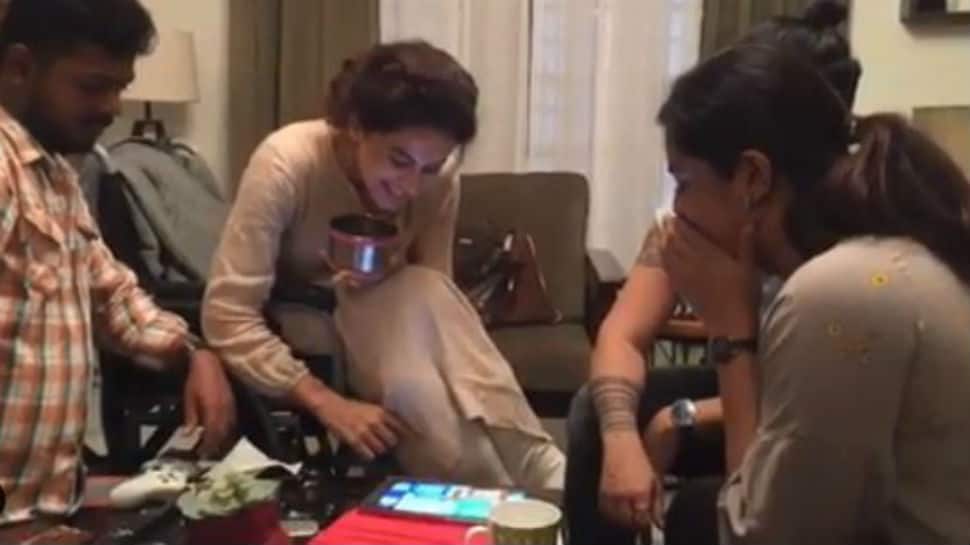 New Delhi: It seems Taapsee Pannu is really excited about her upcoming movie 'Game Over' as she treated fans with a behind-the-scenes video from the film`s shoot.

The actor, who is playing the role of a mental patient in the film, shared a short video wherein she is seen playing ludo with some crew members.

Just like her character in the thriller, the 'Naam Shabana' actor is seated on a wheelchair in the clip. However, what one can't miss is her child-like reaction on winning the game.

To beat the heat of Chennai, she is feasting on what appears to be watermelons, however, the actor is more engrossed in the board game. "Night shoots, bruises on face, fractured legs, low metabolism, Chennai heat but it`s this 'Ludo' that can leave us in splits," she captioned the video on Instagram.

Earlier the actor shared a picture from the sets on Instagram where she is sitting on a sofa with a "head rig".

"Yes, it`s quite fancy n cool to be me. This head rig is the new headgear in fashion in films and in this case Vasant my DOP is my fashion designer," she wrote.

Yes it’s quite fancy n cool to be me  This head rig is the new head gear in fashion in films  and in this case Vasant my DOP is my fashion designer! #GameOver #ThingsAnActorDoes

The 'Pink' star is playing the character of Sapna who suffers from post-traumatic stress disorder.

'Game Over' will be released in Hindi, Tamil, and Telugu. While the film is helmed by Ashwin Saravanan, S Sashikanth is the producer.

Filmmaker Anurag Kashyap, along with Reliance Entertainment and Y Not Studios, is presenting the Hindi version of the movie.

The film is slated to hit the theatres on June 14.

The 'Pink' will also be seen in 'Saand Ki Aankh' opposite Bhumi Pednekar, apart from multi-starrer 'Mission Mangal'.