The biopic drama film directed by Tushar Hiranandani is slated for release on Diwali 2019.

New Delhi: Actress Taapsee Pannu will next be seen in 'Saand Ki Aankh' in which she is essaying the role of sharpshooter Prakashi Tomar. The first look of the film was released recently and it surprised everyone as Taapsee was seen in a never before avatar.

Meanwhile, Taapsee has been regularly sharing behind the scenes pictures from the film, which have made the audience all the more excited to watch the film in theatres. On Sunday, Taapse shared a picture from the film where her character Prakashi Tomar is seen decked up as a bride.

And now, a day later, Taapsee posted another picture from her upcoming film where she is seen as a heavily pregnant woman.

Her caption read, "And then it started...With a village of their own in the house, the family was enough to make their time fly like the wind and before they realise......... #PrakashiTomar #SaandKiAankh
#ThisDiwali." 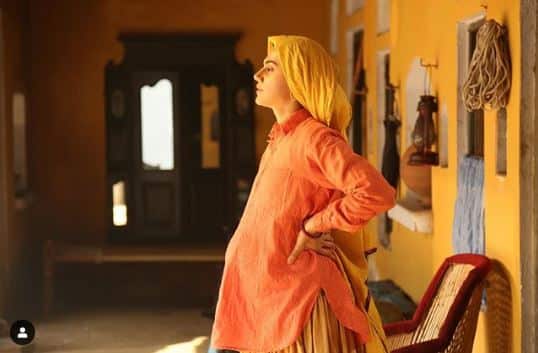 Speaking of the film, 'Saand Ki Aankh' is a biopic based on the life of sharpshooters Chandro Tomar and her sister-in-law Prakashi Tomar. It has been directed by Tushar Hiranandani and produced by Anurag Kashyap. It also features Bhumi Pednekar and Prakash Jha in pivotal roles.

The shooting of the film has been wrapped up and is slated for release on Diwali 2019.