Chasing a modest 150 for victory, Kohli smashed an unbeaten 72 from 52 deliveries, his innings studded with four fours and three sixes as India won with an over to spare. 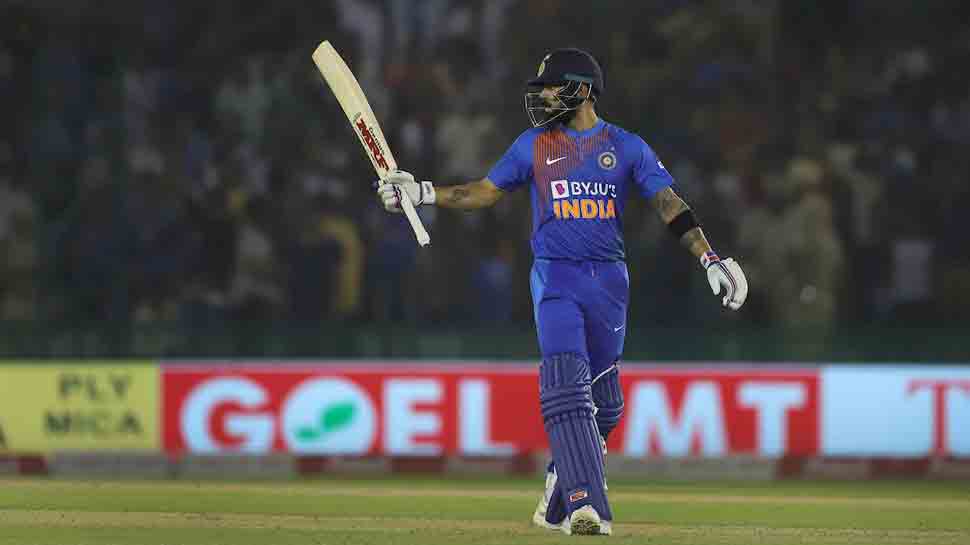 Virat Kohli slammed an unbeaten half century and took a stunning catch to lead from the front as India eased to a seven-wicket win over South Africa in the second T20 international on Wednesday.

Skipper Kohli first took a brilliant catch running to his left from mid-off off Navdeep Saini's bowling in the 12th over to send counterpart Quinton de Kock (52 off 37 balls; 8x4) back in the hut and stymie South Africa's run-flow as they ended up with 149/5 in 20 overs after being asked to bat first.

Chasing a modest 150 for victory, Kohli smashed an unbeaten 72 from 52 deliveries, his innings studded with four fours and three sixes as India won with an over to spare. They put up 151/3 in 19 overs. Kohli's superlative knock got him past vice-captain Rohit Sharma as the leading run-getter in T20 internationals.

Kohli brought up his 22nd fifty in T20Is off 40 balls by hitting Andile Phehlukwayo for a four in the 17th over and in the next, flicked Kagiso Rabada for a six to underline his dominance. In the 19th over, Kohli hit debutant Bjorn Fortuin for a six and a winning four to seal the deal as Shreyas Iyer (16 not out) looked on from the non striker's end.

Besides Kohli, Shikhar Dhawan (40; 31 balls, 4x4 1x6) also got runs on his comeback to the team after getting injured during the World Cup. India were off to a superb start with Rohit and Dhawan, finding the fence at will. Phehlukwayo got rid of Rohit in the fourth over to hand his team some respite as the Indian vice-captain missed a straight delivery and was trapped in front.

In came Kohli and together with Dhawan the pair added 61 runs for the second wicket as the hosts seemed to be easing to the target. David Miller injected fresh life into South Africa's cause by taking a breathtaking catch, diving full length to his right to pluck the ball out of the air with his right hand at long on.

Kohli's reaction said it all as to how good the catch was as Miller's teammates ran to him to celebrate. Rishabh Pant, under the pump for his poor shot selection, did not do his cause any good as he picked out Shamsi at short fine leg off Bjorn Fortuin and was gone for 4, leaving new batting coach Vikram Rathour shaking his head in the dressing room.

But Kohli was batting in a league of his own and Iyer also joined him for two fours as India coasted to victory. Earlier, newly appointed captain de Kock got off to a flying start and brought up his fifty as the away side looked good after ten overs after the first rubber was washed out without a ball being bowled.

De Kock was gone for 52 off 37 balls, (8x4) as South Africa could never recover from the setback. In the last over, Andile Phehlukwayo (8 not out) and Dwaine Pretorius (10 not out) took 16 runs off Saini's over to take them to near the 150-run mark.

The Indian bowlers, led by Deepak Chahar who returned best figures of 2/22 did a good job to bowl a tight line and not let the batters free their arms post de Kock's dismissal. Only 39 runs came off the last five overs.

De Kock was in the mood from the outset, hitting Navdeep Saini for three back-to-back fours in the third over. The stumper-batsman smashed Deepak Chahar for a four in the first ball of the fourth over to signal his intent but his team suffered their first setback when Reeza Hendricks was taken at mid on by Washington Sundar off Chahar for just 6.

Debutant Temba Bavuma joined de Kock in the middle but it was the latter who was doing the bulk of the scoring as South Africa reached 39/1 at the end of Powerplay. In the 10th over, Bavuma joined the act as he slapped comeback man Hardik Pandya for two successive fours through the deep point region.

At the halfway stage, the visitors were 78/1 and de Kock brought up his third T20 fifty in 35 deliveries before Kohli took a stunner of a catch off Saini in the 12th over to send his counterpart back to the hut.

Rassie van der Dussen (1) was caught and bowled by Jadeja but it was Kohli's brilliant catch to remove de Kock that proved to be the turning point of South Africa's innings as the scoring rate dropped despite Bavuma's 49 from 43 balls.

Bavuma was one run short of his fifty when he holed out to Jadeja at mid-on off a Chahar slower ball. David Miller's 15-ball 18 ended in the 19th over just when his team needed him to go big. South Africa played three debutants in Anrich Nortje and Bjorn Fortuin besides Bavuma.