England, who lost the first Test by four wickets against West Indies, will now head into the third and final Test against the Caribbean side, beginning July 24. 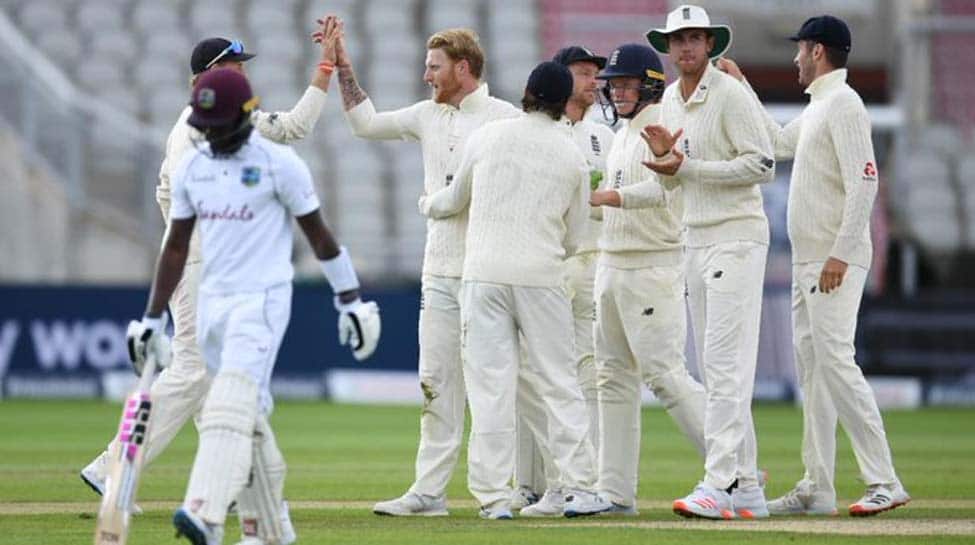 England produced an all-round performance to thrash West Indies by 113 runs in the second Test and level the three-match series 1-1 at the Old Trafford Cricket Stadium in Manchester on Monday.

Subsequently, Roston Chase also failed to add much to his side's innings and departed cheaply for six runs after being caught leg before wicket by Stuart Broad.

Shamarh Brooks (62) and Jermaine Blackwood (55) then joined forces and the duo not only smashed a half-century each but also stitched a crucial 100-run partnership to steady West Indies' innings.

After the duo's departure, the visitors failed to build partnership and were eventually bundled out for 198 runs in their second innings.

Chris Woakes was the pick up the bowlers for England with figures of three for 42, followed by Stuart Broad's three for 66. While Sam Curran bagged two wickets, Dom Bess and Ben Stokes also chipped in with a wicket each.

Earlier in the day, England resumed their second innings at 37 for two, maintaining a 219-lead over the Caribbean side.

Skipper Joe Root, who resumed the day at eight, failed to convert his good start into a big score and was departed for 33-ball 22.

Subsequently, Ben Stokes notched up an unbeaten quick-fire knock of 78 runs, while Ollie Pope remained not out at 12 as England declared their second innings at 129 for three.

Kemar Roach bagged two wickets for the West Indies during that innings.

Earlier, Stuart Broad and Chris Woakes bagged three wickets each, while Sam Curran (2 for 70), Dom Bess (1 for 67) and Ben Stokes (1 for 29) also chipped in to help England bundle out West Indies for 287 runs in their first innings in reply to their score of 469 for nine declared.

Opener Kraigg Brathwaite (75), Shamarh Brooks (68) and Roston Chase (51) were notable contributors for the Caribbean side.

On Day 2, Stokes (176) and Dom Sibley (120) continued their good form as they not only smashed a century each but also stitched a mammoth partnership of 260 runs to help the hosts declare their first-innings at 469/9.

Roston Chase was the pick of the bowlers for the Caribbean side as he finished with figures of five for 172.While Kemar Roach bagged two wickets, Alzarri Joseph and Jason Holder also chipped in with a wicket each.

England, who lost the first Test by four wickets against West Indies, will now head into the third and final Test against the Caribbean side, beginning July 24.