Shikhar Dhawan's majestic knock of 101* powered Delhi Capitals to a crucial 5-wicket victory over Chennai Super Kings. Dhawan has been in fine touch in this year's edition and has scored an impressive 359 runs from 9 matches. 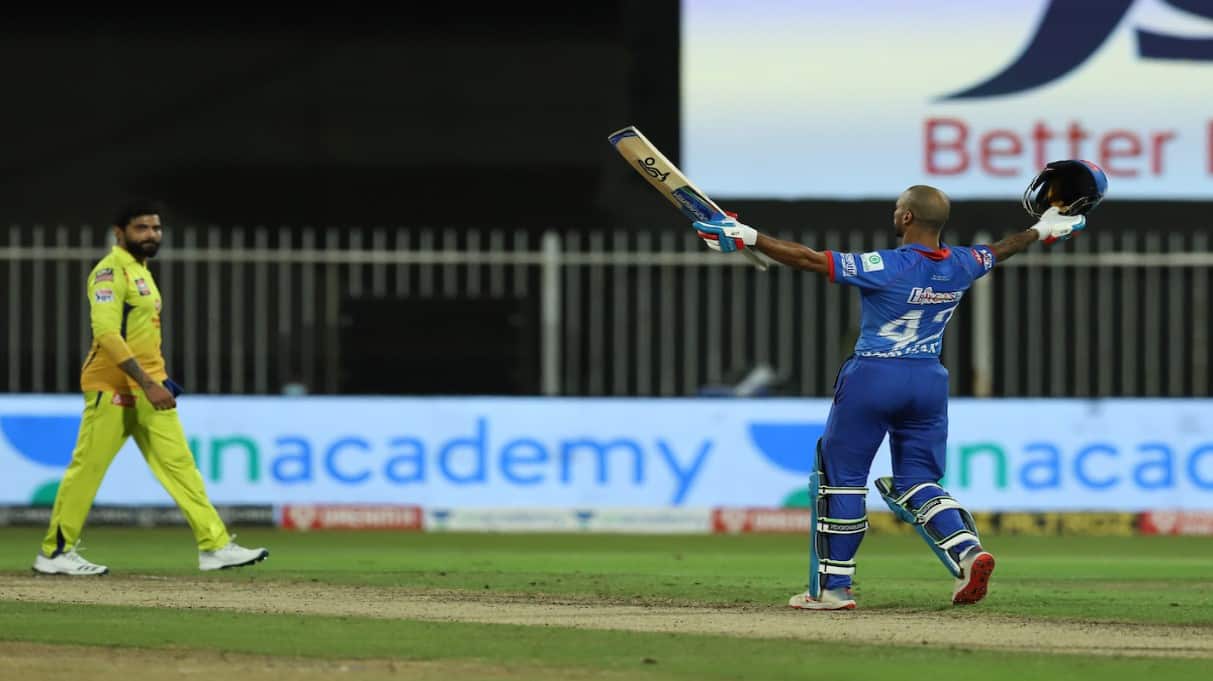 Delhi Capitals' swashbuckling opener Shikhar Dhawan continued his rich vein of form with a majestic innings of 101* which powered his side to a thrilling 5-wicket win over Chennai Super Kings on Saturday (October 17) at the Sharjah Cricket Stadium.

Dhawan, who opened the innings with Prithvi Shaw, carried his bat in the victory which catapulted the Delhi Capitals to the top of the points table - who now have an impressive seven wins from nine games. Dhawan's innings came off just 58 balls and was studded with 14 fours and 1 six.

The southpaw, who had a previous best of 97*, reached the landmark on the penultimate over of the innings bowled by Sam Curran, when he took a single off the last ball. Dhawan was given a lifeline early-on in his innings and accepted it graciously, reaching the mark in his 13th IPL season.

The fact that Dhawan did not celebrate on reaching the century, as 17 runs were still needed from the final over, is an ode to his reputation as a thorough team player.

He only took off his helmet to mark the occasion after Axar Patel hit three sixes in the final over and wrapped up the victory.

Chasing CSK’s solid total of 179/6, Capitals reached the mark with a ball to spare. After losing Shaw and Ajinkya Rahane early on, Dhawan tied-up one end and never let the run-rate drop. He stitched crucial partnerships with Shreyas Iyer (23 off 23 balls) and then with Marcus Stoinis (24 off 14 balls) to keep his side in the game.

Axar Patel provided the late fireworks to take Capitals over the final hurdle which didn’t let Dhawan’s anchoring innings go in vain. Dhawan was deservingly given the man of the match award.

Earlier, MS Dhoni had won the toss and opted to bat first. Faf du Plessis (58 off 47) and Ambati Rayudu (45 off 25) anchored the innings while Ravindra Jadeja (33 off 13) scored a quickfire to take CSK to a handsome total.

Dhawan, 34, has been in prolific form this season. In 9 matches until now, he has scored 359 runs at an average of 51.28 and a strike-rate of 143.02. He currently occupies the fourth spot in the Orange Cap race and will fancy his chances with the Capitals, right on the cusp of booking their playoff berth.