Pandya, who made his India debut in an T20I match against Australia in 2016, is the de facto rockstar of the team. 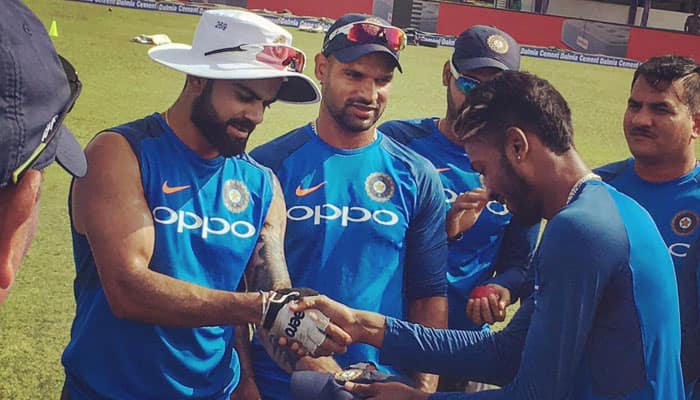 New Delhi: India captain has recently revealed some intriguing facts about Indian team and his relationship with team-mates. One of the most stunning revelation was Hardik Pandya choice of songs.

On 'Breakfast with Champions', Kohli said that "Pandya listens to English songs but he doesn’t know five words of even a single song."

Pandya, who made his India debut in an T20I match against Australia in 2016, is the de facto rockstar of the team. He is even referred to a Caribbean for his heavy voice.

Kohli said that Indian team plays Punjabi music in the dressing room even though most players do not carry iPods. But, it's different for the 24-year-old all-rounder, and at times it gets irritating.

“We play just Punjabi music in the dressing room. Most of the players do not carry their iPods. Hardik Pandya has an iPod. It has all English songs. Pandya listens to English songs but he doesn’t know five words of even a single song. He just grooves to the music beats. We all get irritated with his songs,” Kohli told the host Gaurav Kapur.

The skipper also revealed that Pandya has no control over his tongue, but has a pure heart.

He narrated one incident when Pandya addressed Ravichandran Ashwin as Ravikashyap Ashwin.

“Pandya doesn’t think before speak. Once he wanted to take Ash’s (Ravichandran Ashwin’s) name but he ended up saying ‘Ravikashyap Ashwin kya bowling karta hai yar’. He is very good at heart but he doesn’t have any control over his tongue," Kohli added.

Indian team are currently engaged in a limited series against visiting New Zealand. Kohli & Co won the ODIs 2-1, but will need to win the Thiruvananthapuram match on November 7 for a similar result in the three-match T20I series.