Bangladesh will next take on England on June 8 whereas New Zealand will clash against Afghanistan on the same date. 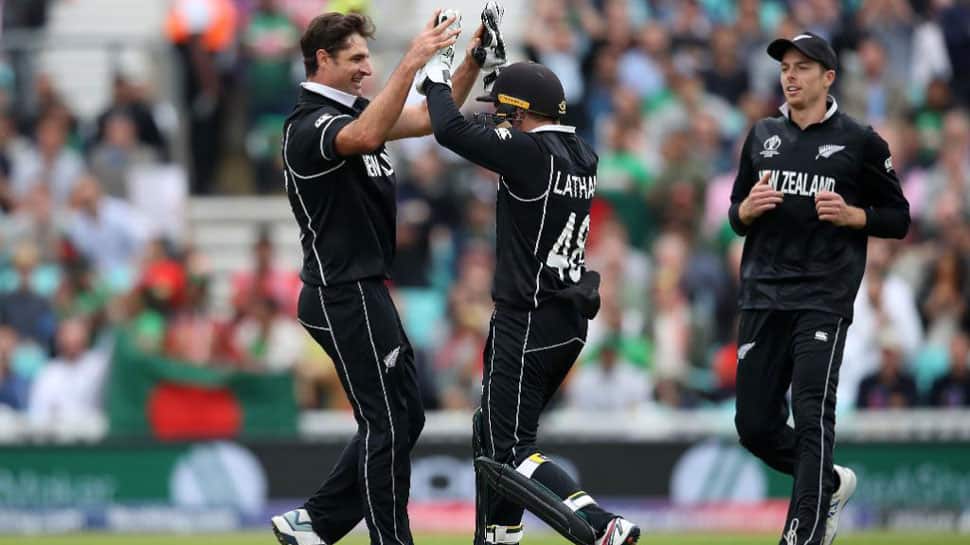 New Zealand defeated Bangladesh by two wickets in the ICC Men`s Cricket World Cup at the Oval on Wednesday. With this win, the Kiwis have won both their matches in the tournament.

Chasing a target of 245, the Kiwis got off to a flying start as openers Martin Guptill and Colin Munro put 35 runs on the scoreboard in the first five overs, but their stand was cut short as Guptill (25) was sent back to the pavilion by Shakib Al Hasan in the sixth over.

Munro and skipper Kane Williamson were able to add just 20 runs for the third wicket as Shakib accounted for his second wicket, dismissing Munro (24) in the tenth over. Ross Taylor came out at bat at number four and he, along with Williamson, scored 105 runs, steadying the innings for New Zealand.

With 85 runs required for the win, Bangladesh were able to dismiss Williamson (40), keeping their hopes alive of winning the match. Tom Latham was sent back to the pavilion for a duck by Mehidy Hasan Miraz, reducing the Kiwis to 162 for four.

Taylor and James Neesham stitched together a 29-run stand but their resistance was cut short as Bangladesh got the prized scalp of Taylor (82) in the 39th over with the Kiwis still needing 53 runs to win.

Soon after, Neesham (25) was also sent back, sending jitters down the New Zealand lineup with the team still needing 27 more runs for the win. In a see-saw battle, the match ebbed and flowed and with the Kiwis needing seven more runs for the win, the eighth Kiwi wicket fell as Matthew Henry (6) was dismissed by Saifuddin.

However, Mitchell Santner and Lockie Ferguson took the BlackCaps over the line by two wickets with 16 balls to spare. Earlier, Shakib`s knock of 64 runs helped Bangladesh post a total of 244 runs in the allotted fifty overs after being put to bat first.

Openers Soumya Sarkar and Tamim Iqbal were able to provide a steady start to the Bangladesh team as the duo added 45 runs to the scoreboard. But their stand was cut short by Matthew Henry as he dismissed Sarkar (25) in the 9th over.

Iqbal (24) was also not able to stay at the crease for a long time as he was sent back to the pavilion in the 14th over by Lockie Ferguson, reducing Bangladesh to 60 for two. Experienced campaigners Mushfiqur and Shakib stitched a 50-run partnership which was looking threatening for the Kiwis.

However, a mix up in between the wickets caused a run-out and Mushfiqur (19) was sent back to the pavilion. The left-handed Shakib (64) scored a half-century and was looking in ominous touch, but he was finally dismissed by de Grandhomme, reducing Bangladesh to 151 for four in the 31st over.

Mohammad Mithun and Mahmudullah put up a 28-run stand, but in search of some quick runs, Mithun (26) departed as he was dismissed by Henry. Mahmudullah (20) was dismissed in the 43rd over by Mitchell Santner but Saifuddin played some big shots in the final overs to take Bangladesh`s total over 240 runs.

Shakib top-scored for Bangladesh with a knock of 64 runs whereas Henry took the maximum wickets for the Kiwis (four). Bangladesh will next take on England on June 8 whereas New Zealand will clash against Afghanistan on the same date.

New Zealand earlier defeated Sri Lanka by ten wickets in their first match of the tournament, whereas Bangladesh defeated South Africa by 21 runs.