Labuschagne was dropped twice by the India fielders as he went on to his century off 195 balls. 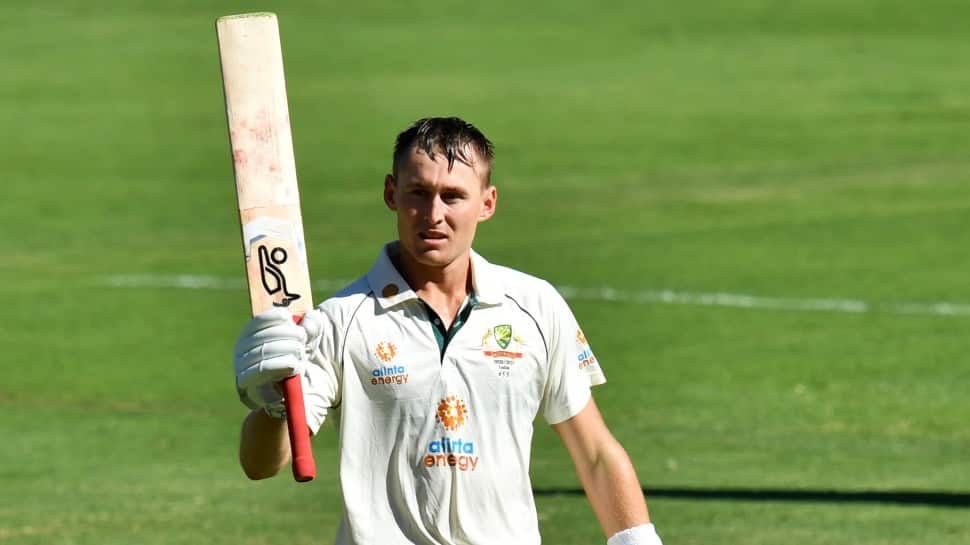 Marnus Labuschagne celebrates after completing a century at the Gabba. (Photo: cricket.com.au)
Share:
Reported By:

It was a battle of attrition on Day One of the fourth and deciding Test at the Gabba in Brisbane on Friday as injury-ravaged India refused to give in even though their bowling attack was crippled just hours into the game with a groin injury to Navdeep Saini. Australia’s Marnus Labuschagne rode his luck to score a fifth Test hundred in just his 18th game.

Labuschagne was dropped twice by the India fielders as he went on to his century off 195 balls. However, young T. Natarajan making his Test debut sent back Labuschagne for 108 – skying a catch to keeper Rishabh Pant going for a pull-shot.

Labuschagne had put on 113 runs for the fourth wickets with Matthew Wade (45), who became Natarajan’s maiden Test wicket – also falling to an attempted pull-shot.

The twin strikes by Natarajan in the final session were nullified by Australian skipper Tim Paine (38 not out) and all-rounder Cameron Green (28 not out) who put on 61 unbeaten runs as Australia ended Day One on 274/5 in 87 overs.

Green was also dropped by Shardul Thakur, who failed to grab on to the offering in his follow through. Natarajan was the pick of the Indian bowlers, claiming 2/63 in 20 overs while Mohammed Siraj, Thakur and Washington Sundar all toiled hard to claim a wicket apiece.

Earlier, Labuschagne rode his luck to reach a half-century and push Australia to 154/3 at tea on day one of the fourth Test as India’s injury crisis deepened on a hot and steamy day at the Gabba.

Labuschagne was 73 not out, with Matthew Wade on 27 at the break, after Australia won the toss and elected to bat on a pitch showing a surprising array of cracks. Already decimated by injuries, Ajinkya Rahane’s makeshift attack were a man down soon after the lunch break as paceman Navdeep Saini came off the ground with a groin strain.

He broke down in his eighth over following a delivery that Labuschagne nicked to Rahane in the gully, only for the India captain to spill the regulation chance. The Australia No. 3 was reprieved on 37 on that ball, and again on 48 when he nicked to Cheteshwar Pujara, who put down a tough, low chance at first slip.

Labuschagne pushed a single to mid-on to bring up his fifty. It was galling for India, who had earlier celebrated the key wicket of Steve Smith for 36 when the master batsman was caught at short midwicket off debutant Washington Sundar’s first ball of his first spell after lunch.

Despite four forced changes to their 11 from Sydney, India had stunned Australia with two early wickets in a dream start before Smith and Labuschagne steadied the ship for the home side in the morning.

Two-test paceman Mohammed Siraj had David Warner caught for one with the sixth ball of the morning, a pearl of a delivery that induced an edge to Rohit Sharma, who dived across to his right from second slip to take a brilliant, low catch.

First change seamer Shardul Thakur, included for only his second test, struck with his first delivery when recalled opener Marcus Harris (5) senselessly flicked an innocuous ball off his pads straight to Sundar at square leg.

Among India’s other changes, top order batsman Mayank Agarwal was recalled to replace Hanuma Vihari, who suffered a hamstring strain in Sydney. All-rounder Ravindra Jadeja was forced out earlier in the week with a broken thumb.

Australia made one change from the Sydney test, with Harris replacing injured opener Will Pucovski.

India vs Australia: Dream debut for Natarajan, sends back Labuschagne and Wade