Time and again, New Zealand have proved that they are one of the toughest opponents for India in the ICC tournaments with the latest being the World Test Championship (WTC) final in June. India have outclassed every challenging opposition team at the ICC events in the last one decade or so, but they have failed to solve the mystery of Black Caps. 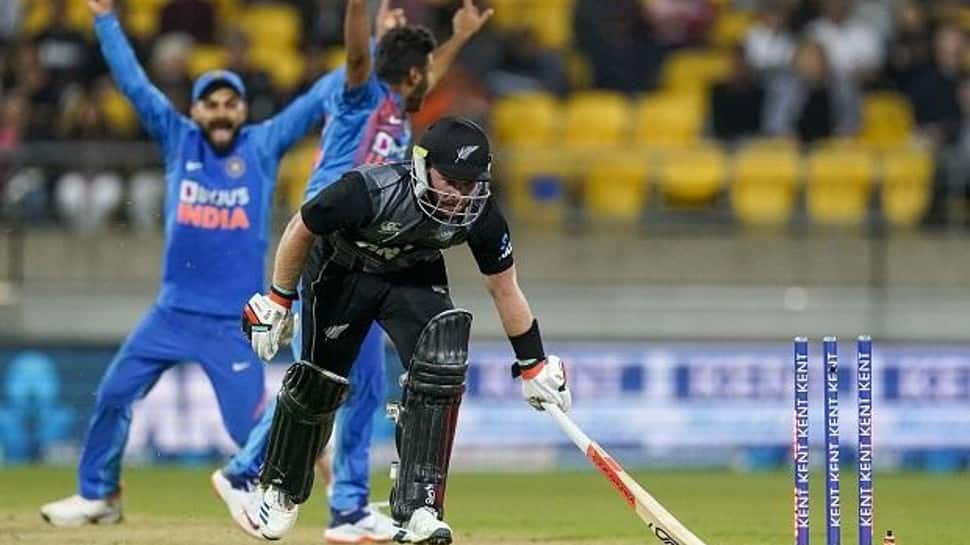 When the Virat Kohli-led Indian cricket team take the field against New Zealand in the ongoing Men's T20 World Cup on Sunday, they will aim to leave the ghosts of poor records versus Black Caps in major International Cricket Council (ICC) events behind and script a new history on the map of world cricket by breaking the jinx.

Time and again, New Zealand have proved that they are one of the toughest opponents for India in the ICC tournaments with the latest being the World Test Championship (WTC) final in June. India have outclassed every challenging opposition team at the ICC events in the last one decade or so, but they have failed to solve the mystery of Black Caps.

Kiwis don't depend on individual brilliance, they hunt in unison and always punch above their weight in ICC tournaments. They have a consistent record in the ICC events and one can't rule them out for a place in the final four.

A fun drill to start our session. #TeamIndia #T20WorldCup pic.twitter.com/lCmla6hcfT

India's seven-wicket win in the 2003 World Cup under Sourav Ganguly was the last time they beat the Kiwis in an ICC tournament. Since then India have lost every match to the Black Caps at ICC events and it won't be an easy task for the Men-in-Blue this time as well.

New Zealand also holds the edge over India in all T20Is. In 16 meetings, it has managed an 8-6 (win-loss) record over India - a success rate of 56.25 being the best for any nation against the Men in Blue in the format.

In the first match of the ongoing T20 World Cup, a fiery opening spell from Pakistan pacer Shaheen Shah Afridi blew apart India's top order and New Zealand too have tall fast bowlers - Trent Boult, Tim Southee, Lockie Ferguson and Kyle Jamieson, who can swing the ball in the powerplay overs. India's top 3 featuring KL Rahul, Rohit Sharma and Virat Kohli will have to carefully tackle the swing and deadly pace in order to win the battle against Kiwis.

The failure of top-order meant that Indian batters couldn't take on Pakistan spinners - Imad Wasim, Shadab Khan and Mohammad Hafeez during middle overs and the likes of Ish Sodhi and Mitchell Santer are also unlikely to give freebies to 'Men in Blue'.

In bowling too, the ordinary performances of Bhuvneshwar Kumar, Mohammed Shami and Ravindra Jadeja against Pakistan doesn't give much confidence. But, the inclusion of Shardul Thakur, who is in red-hot form and R Ashwin, can bring some fresh change for India when they face the Black Caps batting line featuring Martin Guptill, Tim Seifert, Kane Williamson, Devon Conway and others.

Though the current Indian team have surprised everyone with bad performances from time to time in the last few years, they have also shown that they have the capability to make roaring comebacks. Whether it was against Australia or England, this Indian team has made stunning comebacks whenever their ability is questioned.

It will be quite challenging but Virat Kohli's brigade has the talent and ability to pass a certain litmus test over Kane Williamson's boys.

Six teams - New Zealand, Afghanistan, India, Pakistan, Scotland and Namibia are placed in Group 2 and the top two sides will progress to the semifinals. Both India and New Zealand suffered defeat against Pakistan in their opening match and it will be nothing less than a must-win situation for both the teams when they lock horns on Sunday.

If India fail to beat New Zealand, then it could be an interesting race in Group 2 to qualify for the last four given that Pakistan have virtually qualified for the semis after beating Afghanistan on Friday.

In the T20 format, any team can beat others on their given day and India will definitely won't want to take any side lightly especially after suffering a humiliating 10-wicket defeat against arch-rivals Pakistan.