India registered their biggest-ever win, 9 wickets and 10.3 overs in hand, against arch-rivals Pakistan in the Asia Cup Super Four match. 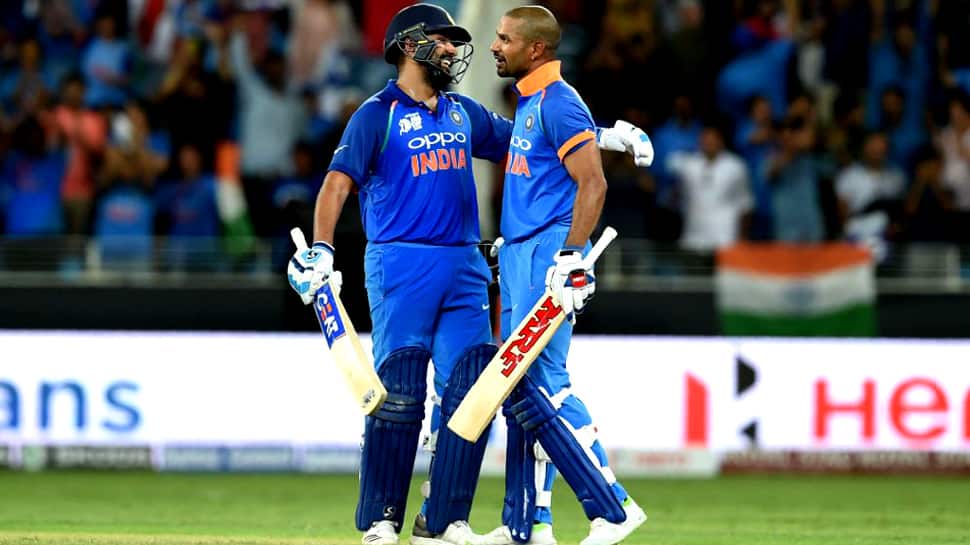 India outperformed arch-rivals Pakistan to win by 9 wickets and ease into the finals of the 2018 Asia Cup. Skipper Rohit Sharma and Shikhar Dhawan toyed with a lacklustre Pakistan bowling attack, steering India to the massive victory. Both Rohit and Dhawan smashed scintillating centuries, 111 (119) and 114 (100) respectively and stitched a brilliant 210-run stand for the opening wicket. Pakistan, on the other hand, failed to put up a decent fight. They bowled poorly and leaked runs at an alarming rate. This was India's biggest win over Pakistan.

# Century!! Another fine ton by the Indian skipper. Rohit Sharma gets to his 19th ODI Century. What an effort! Rohit alongside Dhawan have batted Pakistan out of this match.

# Ambati Rayudu is in at number three!

# The 210 partnership between Dhawan and Rohit is the highest opening stand for India in run chases. What a stand!

# Wicket!!  A sprinting Dhawan is sent back by Rohit, who was hardly interested in the single, but Dhawan falls short of the crease. A stunning knock comes to an end as Dhawan departs for a 100-ball 114. India 210/1!

# Rohit Sharma and Shikhar Dhawan are toying with the Pakistani bowlers. The duo have hit 23 boundaries so far (19 fours and 4 sixes) and are inching closer to their respective centuries. Pakistan seemed to have given up here. They have failed to ball at the right areas and are leaking runs at an alarming rate. India 179/0 after 30 overs.

# Another great opening stand for India. Rohit Sharma and Shikhar Dhawan are starting to bat Pakistan out of this match. After a slow start, the openers accelerated at a stunning rate put India on the front. Pakistan are letting it slip here as skipper Sarfraz Ahmed cuts a frustrated figure. India, at a run-rate of 5.41 with 10 wickets in hand, are cruising at the moment.

# Both the Indian openers are happy to settle in and bid their time in the middle. A good partnership with wickets in hand should get India off to a solid start. As things stand, teams have done well batting second and India would look to make most of it. India 45/0 after 9 overs.

# Rohit Sharma and Shikhar Dhawan open the innings for India.

#  A clinical bowling by India. Jasprit Bumrah was the pick of the Indian bowlers, with impressive figures of 10-1-29-2 at a stunning economy rate of 2.90. India were a livewire in the field, not allowing Pakistan to steal easy runs. Pakistan, on the other hand, may have fallen 20-30 runs short. Pakistan, however, managed to score a competitive 237 on the back of a classy 90-ball 78 by Shoaib Malik. Malik had also stitched a brilliant 107-run partnership with skipper Sarfraz Ahmed (44).

# Wicket!!! Huge wicket for India. Shoaib Malik attempts to glance Bumrah's legside delivery but ends up edging a catch to MS Dhoni. A fine inning by Shoaib, 78 off 90, comes to an end. Pakistan 203/5!

# India finally break the 107-run partnership between Shoaib Malik and Sarfraz Ahmed. Pakistan will be happy with 169 runs on the board and 6 wickets in hand. They still need to score at 8 runs per over to reach 246 runs. Pakistan 171/4 after 41 overs.

#  Shoaib Malik and Sarfraz Ahmed have stitched a threatening 76*-run partnership. Skipper Rohit Sharma would want to break this dangerous partnership to come back into the game. Pakistan 134/3 after 33 overs.

# Pakistan may have lost a wicket too many. The onus is now on skipper Sarfraz Ahmed, who has promoted himself to number 4 today, and the seasoned Shoaib Malik to spend as much as time in the middle and put up a competitive score. India, who have been brilliant on the field, will look to dismiss Shoaib Malik early. Pakistan 75/3 after 21 overs.

# Wicket!! Babar Azam is sent back by skipper Sarfraz but the former falls short of his crease after a quick throw by Chahal.

# Wicket!! A soft dismissal this. Kuldeep Yadav keeps it full to trap Fakhar Zaman on the back pad. The replays, however, showed that the ball had hit his gloves. Pakistan 55/2 after 15 overs.

#  Pakistan are off to a slow start. India, however, will be wary of the dangerous Fakhar Zaman, who can accelerate at will. Pakistan 44/1 after 13 overs.

# Both Zaman and Imam are timing the ball well but are still hunting for the gaps. They have not been troubled so far which is great news for Pakistan. Pakistan 15/0 after 5 overs.

# The wicket is as flat as it can get but Bhuvneshwar Kumar could trouble the Pakistan openers with his street-smart swing. Early wickets will be key for India while Pakistan would look to start cautiously and survive the new ball.

# Fakhar Zaman and Imam-ul-Haq open the innings for Pakistan.

# Pakistan have won the toss and opted to bat first.

Both the sides will compete for the second time in the tournament. India had outclassed Pakistan to win convincingly by 8 wickets with 21 overs in hand. Indian pacers Bhuvneshwar Kumar and Kedar Jadhav had wrecked the Pakistani batting line-up, restricting them to a below-par total of 162. In response, openers Rohit Sharma and Shikhar Dhawan got India off to a solid start against the seam-heavy Pakistan side.

India continued their dominant show against Bangladesh in their first super-four match. A clinical performance by comeback man Ravindra Jadeja and Bhuvneshwar Kumar reduced Bangladesh to 173 runs. Rohit Sharma continued to lead from the front, scoring another classy half-ton (83 off 104 balls) and steering India to a 7-wicket victory with 82 balls to spare.

After edging past Afghanistan with a 3-wicket win, Pakistan look to avenge their loss to India. Pakistan have come back to beat India in the past and would have done their homework against India’s probing spinners, part-timer Kedar Jadhav in particular.