De Villiers played a fine knock of 55 off just 22 balls to rescue a late win for RCB. He hit three consecutive sixes off Jaydev Unadkat in the penultimate over which turned the match in RCB's favor. 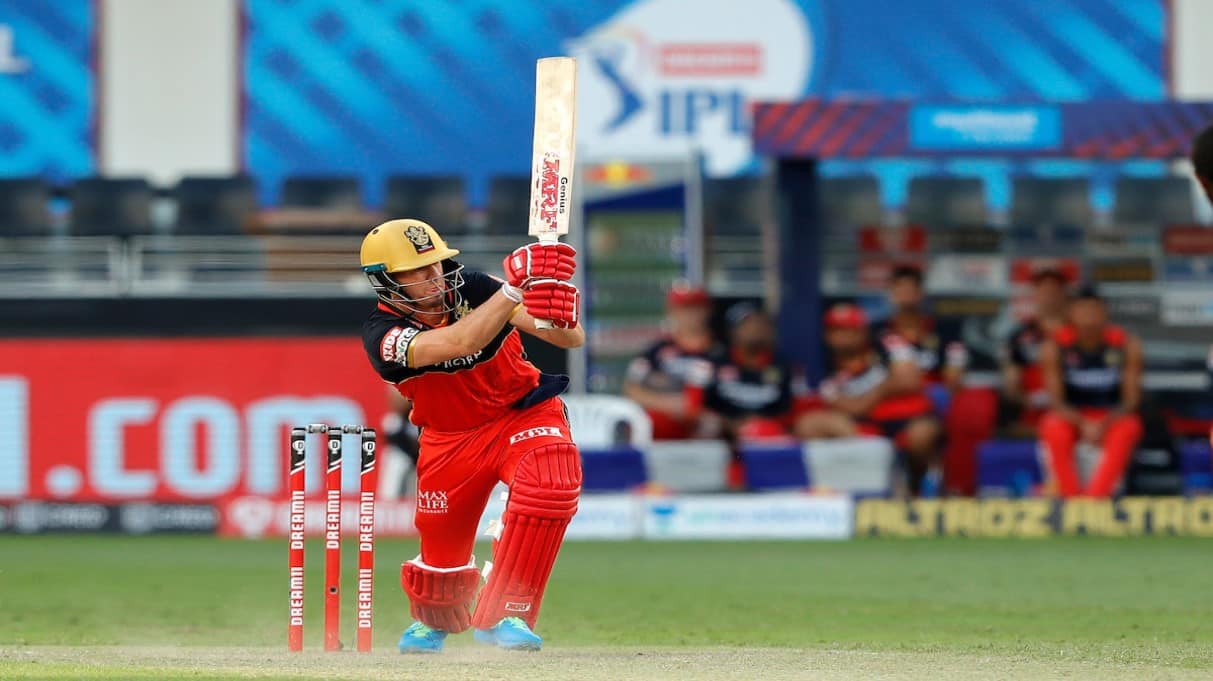 AB de Villiers rescued a crucial victory for his side from the jaws of defeat as Royal Challengers Bangalore defeated Rajasthan Royals by 7 wickets at the Dubai International Stadium on Saturday (October 17).

The South African played a magnificent innings of 55 (off 22 balls; 4x1, 6x6) and in the end, almost single-handedly powered RCB to a thrilling win.

Needing 35 off 12 ball, It was Rajasthan’s game to lose and they let it slip away in the penultimate over. De Villiers hit three consecutive sixes off Jaydev Unadkat to turn the tides in his side's favor.

Chasing Rajasthan’s solid total of 177/6, Aaron Finch departed early for 14. Padikkal and skipper Virat Kohli stitched a crucial 79-run stand for the 2nd wicket. The duo did well to rotate the strike and digged deep to keep their side in the game.

The partnership was finally broken when Rahul Tewatia removed Padikkal for a scrappy 35 off 37 balls. Virat Kohli ( 43 off 32 balls) was then dismissed by youngster Kartik Tyagi on the very next ball off the game. After taking the wicket on the previous ball, Tewatia took a wonderful catch at the deep midwicket fence. Kohli had whipped the ball but Tewatia stopped the ball, leaped over the boundary and then hoped back inside to complete a thrilling catch.

Then it was left onto De Villiers and Gurkeerat Mann to rescue a victory and the South African was certainly upto the task. He finished things off in style with a huge six off Jofra Archer.

Earlier, Rajasthan Royals won the toss and opted to bat first. n a surprising move, Robin Uthappa was sent in to open the innings alongside Ben Stokes. The decision proved unerring as Uthappa was magnificent on the day making 41 off 22 balls.

In the third over of the innings he hit 4 fours in an over off the wily Washington Sundar. Stokes played second fiddle to him, rotating the strike well.

The partnership was finally broken when Stokes was caught behind off Morris. The duo engaged in a solid 50-run opening stand.

Yuzvendra Chahal brought RCB right back into the game by removing the dangerous Robin Uthappa and Sanju Samson off consecutive balls.

Chahal, RCB's most dependent bowler finished with wonderful figures of as he tightened the spinners tightened the screws around Rajasthan in the middle overs.

After losing three quick wickets, skipper Steve Smith and Jos Buttler took to the crease. The experienced duo stitched together a crucial 58-run stand in the middle overs - tackling the excellent spin bowling from Chahal, Ahmed and Sundar.

The partnership was finally broken when Buttler departed off Morris after making 24.

For RCB, Chris Morris was the pick of the bowlers with figures 4-0-26-4 – He have away just 4 runs in the final over of the innings and also racked-up two wickets.

AB de Villiers was awarded the man of the match for his rapid-fire knock.

With this win, RCB have consolidated their third position on the points table and would want to book their place into the IPL playoffs at the earliest.