Faulkner took two wickets in his first over, the second of the innings, to have Peshawar in early trouble before Rashid Khan took a pair in the 10th to keep the Qalandars in control. Rashid ended with 5/20 to restrict Peshawar to 160/8, despite Shoaib Malik’s 48-ball 73. 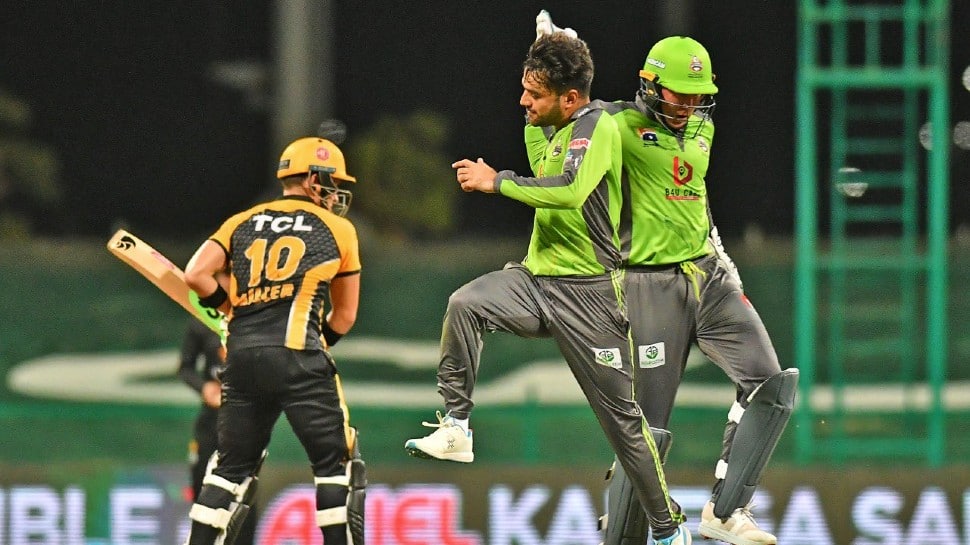 The competition-leading Lahore Qalandars had a 10-run win over Peshawar Zalmi as the second game in the first double-header since the resumption of the Pakistan Super League finished in the early hours of Friday morning. The Qalandars slipped to 25/4 after 7 overs before Ben Dunk (48) and Tim David combined in an 81-run partnership to re-set the innings. David, who finished unbeaten on 64 from 36 balls, then shared a late 47-run stand with James Faulkner (22) to lift the Qalandars to 170/8.

Faulkner took two wickets in his first over, the second of the innings, to have Peshawar in early trouble before Rashid Khan took a pair in the 10th to keep the Qalandars in control. Rashid returned 5/20 to restrict Peshawar to 160/8, despite Shoaib Malik’s 48-ball 73.

In the earlier game, Babar Azam’s unbeaten half century went in vain as Multan Sultans defeated defending champion Karachi Kings by 12 runs. Azam hit 85 off 63 balls, but Multan held Karachi to 164-7 through some disciplined seam and spin bowling.

After being put into bat, Multan did well in the end to push its total to 176-5 with left-handed Khushdil Shah remaining unbeaten on 44 off 32 balls. Fast bowler Imran Khan claimed 3-28 and leg-spinner Imran Tahir picked up the key wickets of Martin Guptill and Afghanistan's Najibullah Zadran, who both scored 11 runs each as Azam was kept in check by the Multan bowlers.

Azam took his time to settle down and got little support from the other end to challenge the target. Azam raised his 18th half century in the PSL off 45 balls but his five fours and four sixes in the end were not enough to carry his team home.

Khan claimed all his three wickets in the last over and was on a hat trick when he dismissed Thisara Perera and captain Imad Wasim off successive deliveries. Qasim Akram denied Khan the hat trick before offering a tame catch off the last ball at extra cover.

South African Rilee Rossouw smashed seven fours in his quickfire 44 off 24 balls and it looked like Multan could cross the 200-run mark. Rossouw and captain Mohammad Rizwan (29) shared a 68-run third wicket stand off 39 balls as Multan reached 107/2 by the halfway stage.

But Karachi hit back through Thisara Perera, who bagged 2/12 off his three overs as Rossouw sliced a catch to long on and Rizwan was run-out in the same over while attempting a needless second run.

The left-handed Shah propelled Multan’s total with an unbeaten 44 off 32 balls when he hammered Mohammad Amir for three fours and a six in the last over as the left-arm fast bowler, now retired from international cricket, finished with expensive figures of 0/42 off his four overs.

Pakistan’s premier Twenty20 league was moved to Abu Dhabi for the remaining 20 games after it was suspended in March when several players and support staff tested positive for COVID-19 in a bio-secure bubble at Karachi.

Throwback: When MS Dhoni made Virat Kohli run in a match like ‘fitness test’