The Black Caps secured their third successive win in the tournament in England with a seven-wicket victory over Afghanistan in Taunton on Saturday to sit top of the standings on six points. 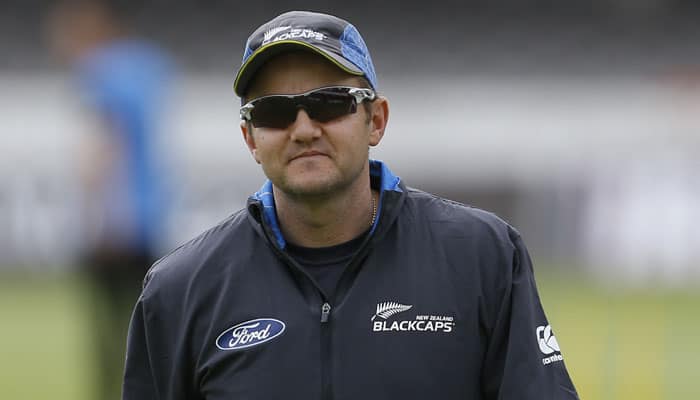 The Black Caps secured their third successive win in the tournament in England with a seven-wicket victory over Afghanistan in Taunton on Saturday to sit top of the standings on six points.

Kane Williamson`s side have been unchanged in their three matches but Hesson, who guided the side to their only World Cup final in Australia in 2015, said they should consider bringing back Nicholls and opening bowler Southee and introducing Sodhi.

"I don`t subscribe to the theory of never changing a winning team, particularly when Nicholls and Southee were the incumbents before they got injured," Hesson wrote in a column on Stuff Media on Sunday.

"It might mean Colin de Grandhomme and Matt Henry sit this one out. Again, horses for courses."

While New Zealand`s bowlers have set the platform for their three victories by restricting Sri Lanka, Bangladesh and Afghanistan to below-par scores, Hesson said India would put pressure on the batters in Nottingham on Thursday.

"Conditions will be so different, and India`s two-pronged wrist spin attack of Yuzvendra Chahal and Kuldeep Yadav will challenge our middle order," Hesson added.

"That`s where Nicholls is a serious option at six. Jimmy Neesham and de Grandhomme are both good ball strikers but not our best players of wrist spin.

"If you have Nicholls and Tom Latham in the middle order they can hopefully score freely off these spinners as they can sweep and reverse sweep.

"You need to be able to have batsmen through the middle who have enough high percentage scoring opportunities."

Hesson also thought that Sodhi would provide something different on a Trent Bridge pitch that could suit having two spinners in the lineup.

"I`d expect it to be the best surface they`ve played on so far, and a high scoring game," he wrote.

"If they remove all the grass from the pitch, the other option is bring in Sodhi for Henry with Neesham as your third seamer; two frontline spinners and Colin Munro up your sleeve."

Hesson, whose original contract was through the end of the tournament before he quit unexpectedly last year, added that he thought the team had achieved what they needed to so far with three wins and should now be contenders for the semi-finals.

"This New Zealand team gets a strong pass mark for their first eight days at the Cricket World Cup, and fans should be increasingly confident about the chances of progressing to the knockout stages," he wrote.

"Can New Zealand beat India? They showed in the warm-up game they can. If you get the ball to swing we`re very much in the game.

"If it doesn`t swing and it`s flat, we are going to be challenged."

ICC World Cup 2019, India vs Australia: As it happened