Weather predictions for Monday state rain throughout the day with a high of 14 degrees and low of around 11 degrees in temperature. 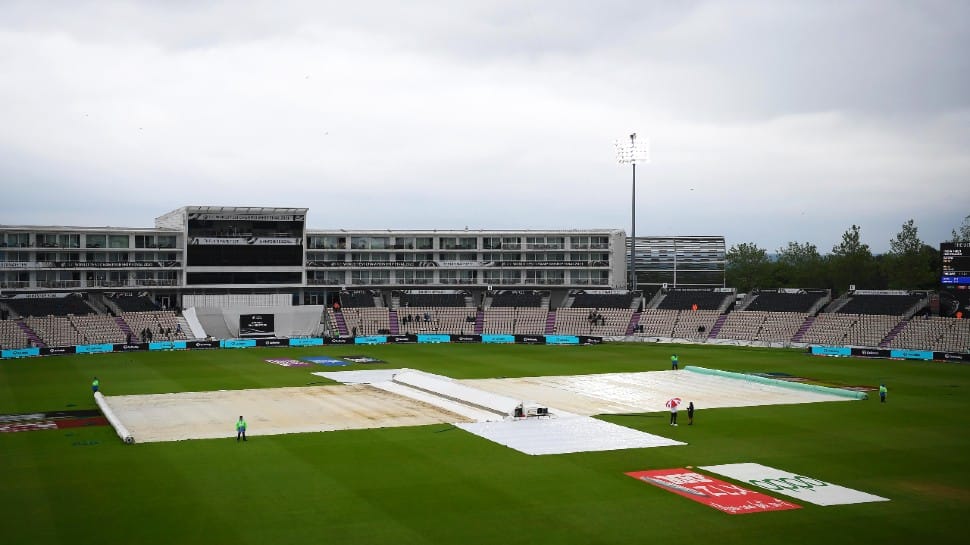 The inaugural World Test Championship Final has fallen victim to inclement weather in Southampton with New Zealand at 101/2 in reply to Team India’s 217 all out after three days play at the Ageas Bowl. The forecast for Monday (June 21) is not looking too bright either with incessant rain predicted at Southampton on Day 4 of the WTC Final

The third day’s play, which saw close to 80 overs being bowled, India were bundled out for 217 after resuming at the overnight score of 146/3. The game started half an hour late due to a wet outfield caused by overnight rain and same should be expected on Day 4 as well as Sunday night also saw plenty of rain in the city.

Weather predictions for Monday state rain throughout the day with a high of 14 degrees and low of around 11 degrees in temperature. Even former India wicketkeeper and commentator Dinesh Karthik didn't have great news from Southampton. Karthik tweeted from his hotel room at Hilton at Ageas Bowl in Southampton, the grim weather in the city.

If you thought the first three days were disappointing in terms of the weather at Southampton, Day 4 looks worse. The forecast suggests that rain is inevitable and that should be extremely disappointing for fans who have waited long to watch their favourites go head to head. The humidity would also be on the higher side which would make things uncomfortable for players – that is if play takes place.

In case the game does not end in five days, the match will enter the reserve day. Initially, the priority will be to finish the game within five days by adding some extra overs to the gameplay if the conditions are suitable. The reserve day will not take place in case of completion of overs and at the same time match will end in a draw. Both teams will be declared as co-winners in that case and the reward money will be distributed equally.

“In the event of time being lost during the match, the ICC match referee will regularly update the teams and media about the way in which the reserve day may be used. The final decision on whether the reserve day needs to be used will be announced at the scheduled start of the last hour on the fifth day,” an ICC statement said.