Women in India celebrate the much-awaited Karwa Chauth festival with much gusto and fervour. On this special day, women observe a day-long fast (vrat) for the long life and well being of their spouses. This year Karwa Chauth will be celebrated on October 17, Thursday. 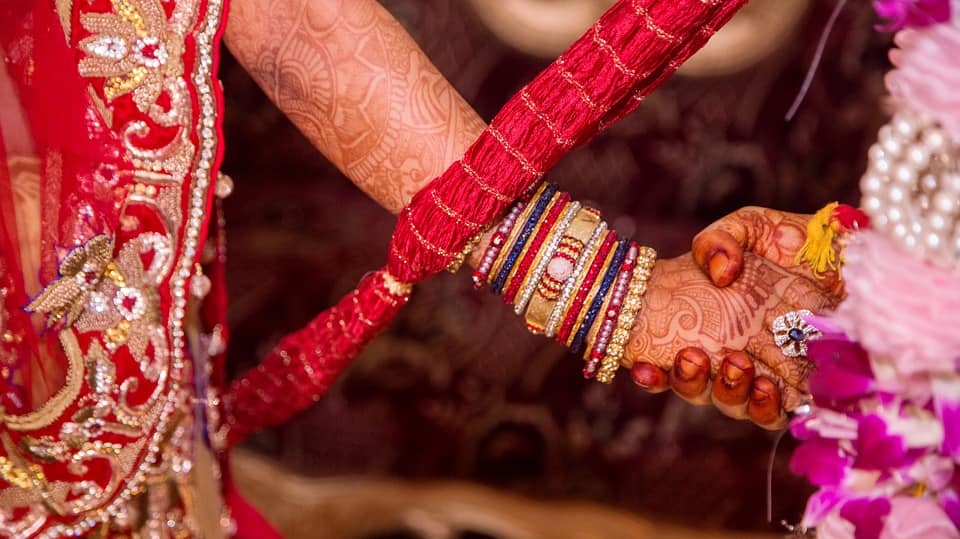 New Delhi: Women in India celebrate the much-awaited Karwa Chauth festival with much gusto and fervour. On this special day, women observe a day-long fast (vrat) for the long life and well being of their spouses. This year Karwa Chauth will be celebrated on October 17, Thursday.

Women and in fact unmarried girls also keep a fast on this day, hoping to get a groom of their choice. The day begins before sunrise for all those who observe the fast. They get-up in the wee hours and savour the Sargi before sunrise. Sargi comes from her mother-in-law and Baya from her mother.

It comprises fruits, sweets, clothes, jewellery etc. The Baya contains the Karwa, the pitcher which is of utmost importance in the Puja. After consuming it, they observe the fast for the whole day, only to break it after catching a glimpse of the beautiful moon.

In the evening, women folk dressed in their new, beautiful traditional attire, decked-up in jewellery and make-up, sit together in a group and the Karwa Chauth Katha (legend) is narrated. After praying to the goddess for their husband's long life and well being, the women wait for the moonrise patiently.

Also, the application of henna (Mehendi) on hands is a tradition which is very popular amongst women and even unmarried girls.

There are various legends and beliefs associated with the festival. Here are the popular ones:

Queen Veeravati and her brothers

Many years ago, there lived a beautiful queen, Veeravati, who was the only sister to her seven loving brothers. Veeravati was married to a King. She celebrated her first Karwa Chauth at her parents' house. After the sunrise, she began a strict fast, devoted to the long life of her husband.

However, the queen was unable to withstand the austerities of the fast and was desperately waiting for the moon to rise. Her brothers were appalled to see their sister in such distress and decided to end her hunger and thirst by creating a mirror in a pipal tree that made it look as though the moon had risen.

Deceived by her brothers, Veeravati mistook the mirror for the moon and broke her fast. However, the moment the queen ate her dinner, she received the news that her husband, the king, was dead. Grief-stricken, she lamented through the night, compelling the Goddess to appear before her. On hearing her agony, the Goddess revealed the deception of her brothers and advised her to re-perform the Karwa Chauth rituals with complete devotion in order to revive her husband. On obliging to the words of the Goddess, the Queen performed the rituals again wholeheartedly which obligated the Yamaraja to revive her husband.

Another variant of this story narrates the construction of a massive fire behind a huge mountain by her brothers, imparting a glow, similar to that of the moon, and tricking Veeravati to break her fast. Soon the news arrives that her husband is dead, leaving her tormented and heartbroken.

She rushes towards her husband's kingdom but is intercepted by Lord Shiva and Goddess Parvati. The Mother Goddess Parvati discloses the trickery of her brothers to the queen and incises her own finger to give Veeravati a few drops of Holy blood. The Goddess instructs her to be cautious and perform the Karva Chauth rituals with complete devotion the next time. Veeravati sprinkles the Holy blood on the corpse of her husband which results in bringing him back to life and thus reuniting them.

The Legend of Karwa

A woman named Karwa was extremely devoted to her husband, which gave her the spiritual power of chastity. One day, while bathing in a river, her husband was caught by a large crocodile. Karwa came running and constrained the crocodile with cotton yarn. She then went to Yama, the God of Death, and asked him to send the crocodile to hell, who had dared to attack her husband. Yama refused to oblige, which led to the rile of Karwa and she warned to curse and destroy him if he turned down her demand. Frightened by the power of a Pati-Vrata wife, Yama readily accepted her plea and blessed Karwa's husband with a long life. To this day, Karwa Chauth is celebrated with great faith and belief.

The tale of Satyavan and Savitri

According to this very popular belief, when Lord Yama came to procure the life of Satyavan, his wife Savitri begged to let him live. Yama refused to oblige her. Adamant on her decision, Savitri stopped eating and drinking and followed Yama who carried the soul of her dead husband to Yamalok. Astonished by her devotion and love, Yama told her to ask him for any boon except the life of her husband. Savitri asked him to bless her with children. Yama agreed and gave her the boon. Being a Pati-Vrata wife she would never let any other man be a father to her children. Not wanting to deprive her children of the love of their father, Yama relented as he had no other choice than to revive her husband, Satyavan.

The Karwa Chauth ritual date back to the time when Draupadi, the wife of Pandavas observed this fast. When Arjuna descended to Nilgiris for penance, the Pandavas got stuck in a pool of trouble. In these difficult times, Draupadi remembered Lord Krishna.