The major highlights of the Interim Budget 2019-20 include a new deal for 12 crore Small and Marginal farmers with direct income support, a pension initiative for 10 crore unorganized sector workers and exempting income up to Rs 5 lakhs from Income Tax. 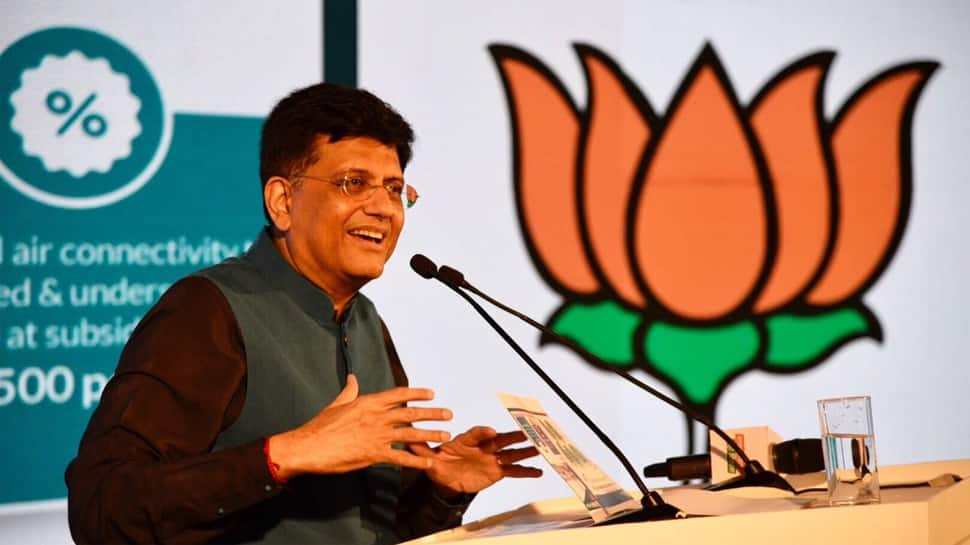 Interim Budget 2019-20 was presented in Parliament on Friday by Finance Minister Piyush Goyal. Besides having a major Scheme for the farmers, it provides tax sops and sets the Developmental Agenda for the years to come.

The major highlights of the Interim Budget 2019-20 include a new deal for 12 crore Small and Marginal farmers with direct income support, a pension initiative for 10 crore unorganized sector workers, exempting income up to Rs 5 lakhs from Income Tax, reforms in stamp duty, highest ever budgetary allocation of Rs 3 lakh crore for Defence, record allocation of funds at Rs 58,166 crore for North Eastern Areas, a new AIIMS for Haryana, single window clearance for Indian filmmakers at par with foreigners and higher budgetary allocations for Education, Health, Infrastructure and for the welfare of weaker sections including Scheduled Castes and Scheduled Tribes, a Separate Department of Fisheries for welfare of 1.5 crore fisherman.

New Scheme- namely “Pradhan Mantri Kisan Samman Nidhi (PM-KISAN)” to extend direct income support at the rate of Rs. 6,000 per year to farmer families, having cultivable land upto 2 hectares is announced. Under this scheme, Rs 2,000 each will be transferred to the bank accounts of around 12 crore small and marginal farmer families, in three equal instalments. This programme would be made effective from 1 December 2018 and the first instalment for the period upto31 March 2019 would be paid during this year itself.

To provide sustained and focused attention towards the development of Fisheries, the  Government has decided to create a separate Department of Fisheries. Finance Minister said that through the

measure, the Government wants to promote further growth over 7% to promote the livelihood of about 1.45 crore people dependent on the sector. Goyal announced 2% interest subvention to the farmers pursuing the activities of animal husbandry and fisheries, who avail loan through Kisan Credit Card. Further, in case of timely repayment of loan, they will also get an additional 3% interest subvention.

Allocation of Rs 750 crore for Rashtriya Gokul Mission has been announced for the current year itself. Setting up of "Rashtriya Kamdhenu Aayog" to upscale sustainable genetic upgradation of cow resources and to enhance production and productivity of cows has also been announced. The Aayog will also look after effective implementation of laws and welfare schemes for cow.

To provide pensionary benefits to at least 10 crore labourers and workers in the unorganised sector a new Scheme called 'Pradhan Mantri Shram-Yogi Maandhan' is announced.  The Finance Minister said that within next five years it would be one of the largest pension schemes of the world. A sum of Rs.500 crore has been allocated for the Scheme. Additional funds will be provided as needed, Goyal added. The scheme will also be implemented from the current year, he said.

Individual taxpayers having taxable annual income up to Rs.5 lakhs will not be required to pay any income tax. The Finance Minister said that persons having gross income up to Rs. 6.50 lakhs are not required to pay any income tax if they make investments in provident funds, specified savings and insurance etc. Additional deductions such as interest on home loan up to Rs. 2 lakh, interest on education loans, National Pension Scheme contributions, medical insurance and medical expenditure on senior citizens etc, are also provided for in the Interim Budget 2019-20. Thus tax benefit of Rs. 18,500 crore is proposed to be provided to an estimated 3 crore middle class and small taxpayers comprising self employed, small business, small traders, salary earners, pensioners and senior citizens.

For salaried persons, Standard Deduction is being raised from the current Rs.40,000 to Rs.50,000. This will provide additional tax benefit of Rs. 4,700 crore to more than 3 crore salary earners and pensioners.

TDS threshold on interest earned on bank/post office deposits is being raised from Rs 10,000 to Rs.40,000.

TDS threshold for deduction of tax on rent is proposed to be increased from Rs. 1,80,000 to Rs.2,40,000 for providing relief to small taxpayers.

The Finance Minister says that the Government wants the GST burden on home buyers to be reduced and accordingly the GST Council was moved to appoint a Group of Ministers to examine and make recommendations in this regard at the earliest.

Goyal said that soon, businesses comprising over 90% of GST payers will be allowed to file quarterly return.

The Finance Minister said that the Government has been successful in bringing down average inflation to 4.6% over last five years, which is lower than the inflation during the tenure of any other Government. In fact Inflation in December 2018 was down to 2.19% only. Goyal said if we had not controlled inflation, our families would have been spending around 35-40% more today on basic necessities such as food, travel, consumer durables, housing etc. The average rate of inflation during previous five years 2009-2014 was a backbreaking 10.1%, he pointed out.

The fiscal deficit has been brought down to 3.4% in 2018-19 RE from the high of almost 6% seven years ago, the Finance Minister mentioned.  He said, the Current Account Deficit (CAD), against a high of 5.6% six years ago, is likely to be only 2.5% of GDP this year. “We contained the fiscal deficit notwithstanding the Finance Commission's recommendations increasing the share of the States from 32% to 42% in central taxes, which we accepted in the true spirit of cooperative federalism, thereby transferring significantly higher amounts to the States”, Goyal said.

The Finance Minister Piyush Goyal stated that a stage for high growth in decades to come, has now been set, after a wave of next generation path breaking structural reforms over the last five years, including introduction of Goods and Services Tax (GST) and other taxation reforms.

The country witnessed its best phase of macro-economic stability during the last five years. “We are the fastest growing major economy in the world with an annual average GDP growth during last five years higher than the growth achieved by any Government since economic reforms began in 1991. From being the 11th largest economy in the world in 2013-14, we are today the 6th largest in the world”, the Finance Minister asserted in his Opening Remarks  of his Budget speech.

Goyal said that due to such a stable and predictable regulatory regime, growing economy and strong fundamentals, India could attract massive amount of as much as $239 billion of Foreign Direct Investment (FDI) during the last 5 years, when most of the FDI was allowed to come in through the automatic route.

Announcing an allocation of Rs.60,000 crores for MGNREGA for Budget Estimates 2019-20,  the Finance Minister said that additional allocations will be made, if required.

By March, 2019, all households will be provided with electricity connection.  Till now, 143 crore LED bulbs have been provided in a mission mode which has resulted in saving of Rs.50,000 crore for the poor and middle class.

He said through the world’s largest healthcare programme, Ayushman Bharat, to provide medical treatment to nearly 50 crore people in the country,  around 10 lakh patients have already benefited through free treatment for medical treatment which would have otherwise cost them Rs. 3,000 crore. Lakhs of poor and middle class people are also benefiting from reduction in the prices of essential medicines, cardiac stents and knee implants, and availability of medicines at affordable prices through Pradhan Mantri Jan Aushadhi Kendras, the Finance Minister added.

Goyal also said that 14 of the 21 AIIMS operating or being established in the country presently have been announced since 2014. He also announced setting up of a new - the 22nd AIIMS in Haryana.

The Finance Minister said that a Welfare Development Board to frame special strategies for the benefit of the  hard-to-reach De-notified, Nomadic and Semi-Nomadic communities will be set up under the Ministry of Social Justice and Empowerment. He said that a Committee under NITI Aayog will also be set up to complete the task of identifying De-notified, Nomadic and Semi-Nomadic communities not yet formally classified.

Goyal said under the Ujjwala Yojana aiming delivery  of 8 crore free LPG connections, more than 6 crore connections have already been given and the remaining will get free gas connections by next year.

The Finance Minister stated that the Government e-Marketplace (GeM), created by the present Government two years ago, resulted in average savings of 25-28% and the platform will now be extended to all CPSEs. Transactions of over Rs. 17,500 crore have taken place so far.

The Finance Minister announced that for the first time, the country’s Defence Budget will be of over Rs.3 lakh crore.

The Finance Minister pointed-out that domestic air traffic passengers have doubled during the last five years, leading to large number of jobs also being created. The number of operational airports has crossed 100 with the commissioning of the Pakyong airport in Sikkim.  Arunachal Pradesh came on the air map recently and Meghalaya, Tripura and Mizoram have come on India’s rail map for the first time.

India’s installed solar generation capacity has grown over ten times in last five years. Stating this, Goyal said that “our commitment to promote renewable energy is reflected in setting up the International Solar Alliance, the first treaty based international inter-governmental organisation headquartered in India. This sector is now creating lakhs of new age jobs, he added.

The Finance Minister announced that in Entertainment industry, which is a major employment generator, regulatory provisions will now rely more on self-declarations. To promote entertainment industry, the Single window clearance for ease of shooting films, now available only to foreigners, will also be made available to Indian filmmakers. “We will also introduce anti-camcording provisions in the Cinematograph Act to control the menace of piracy”, he said.

Saying that “We are poised to become a Five Trillion Dollar Economy in the next five years and aspire to become a Ten Trillion Dollar Economy in the next 8 years thereafter”, Goyal said that there has been a Growth of 18% in Direct Tax Collections in 2017-18 and increase in tax base by as many as 1.06 crore people filing income tax returns for the first time in FY 2017-18, mainly on account of demonetisation.

Goyal said that he is proposing, through the Finance Bill, necessary amendments to levy Stamp duties on one instrument relating to one transaction and get collected at one place through the Stock Exchanges. The duty so collected will be shared with the State Governments seamlessly on the basis of domicile of buying client, he said.

2 lakh seats to be added in government institutes: Piyush Goyal in Interim Budget 2019