Here’s good news for ardent fans of Zee TV. Zee Entertainment Enterprises Limited (ZEEL) Monday announced the launch of a new Corporate Brand Film based on its global positioning of ‘Vasudhaiva Kutumbakam – The World is My Family’. 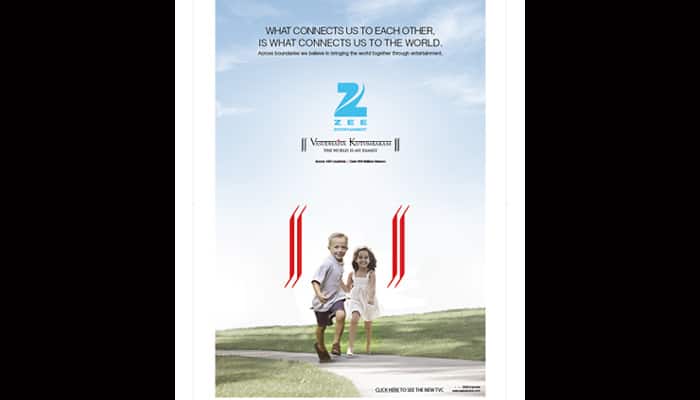 Mumbai: Here’s good news for ardent fans of Zee TV. Zee Entertainment Enterprises Limited (ZEEL) Monday announced the launch of a new Corporate Brand Film based on its global positioning and philosophy of ‘Vasudhaiva Kutumbakam – The World is My Family’.

The film will be aired LIVE on all ZEE Entertainment and ZEE Media channels starting May 18, 2015.

Speaking on the new brand film, Roland Landers, Head – Corporate Brand, ZEEL said, “In its journey of 22 years, ZEE has made a significant place in the hearts and minds of millions of viewers across the world. Through this film, we not only cherish their presence, but also welcome the world to be a part of this family.”

Satbir Singh, Chief Creative Officer, FCB Ulka, the communications agency that created the film said, “ZEE is today this massive family with millions of family members around the world, connected through highly engaging television and movie content. We are celebrating this inclusive value of Vasudhaiva Kutumbakam, or the World is a Family, with this film.”

ZEEL had unveiled its Corporate Brand positioning and identity - ‘Vasudhaiva Kutumbakam - The World is my Family’, in 2013. Currently reaching over 959 million viewers across 169 countries, the film reiterates ZEE’s role as a global brand, a cultural ambassador, uniting people in India and across the world through its wide network of 33 domestic and 36 international channels. ‘Vasudhaiva Kutumbakam’ is the ancient Indian dictum on shared humanity, promoting a world where there is unity, harmony, and respect for every individual irrespective of caste and creed. The concept originated in the Maha Upanishad in a shloka and it means - “Only small men discriminate saying: One is a relative; the other is a stranger. For those who live magnanimously the entire world constitutes but a family.”