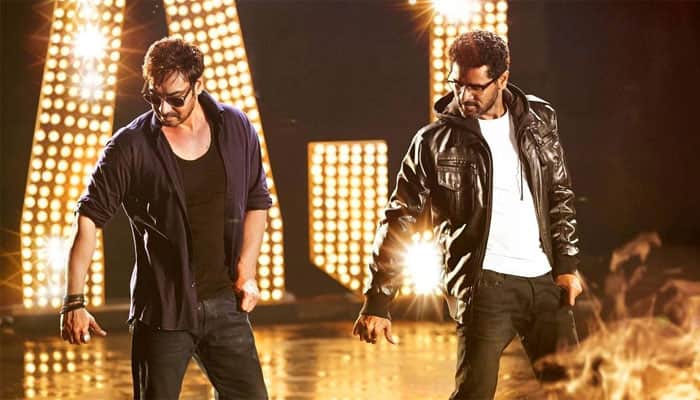 When you have a hunk with a chiseled physique and three women romancing him, what would you ideally expect? Some real entertainment? However, Prabhudheva unapologetically proves you wrong!

Prabhu’s earlier works ‘Rowdy Rathore’ and ‘R...Rajkumar’ were a lot better and had at least some 'masala' sporadically scattered. Unfortunately, ‘Action Jackson’ has nothing much to offer – neither to the actors involved nor to the audiences who expect some entertainment out of a film.

It all starts with a coy waiter (Ajay Devgn) who is a good samaritan, working in a restaurant in Pune. He requests his manager to grant him leave for a week and is obliged with the same.

Cut to - we have Ajay speeding on a bike on the streets of Mumbai, in a completely different avatar. The Ajay in Mumbai is flashy, flamboyant, rowdy and all what a girl wouldn’t expect her ideal man to be. But as usual, we have a heroine –Khushi – played by Sonakshi Sinha who sees her ultimate man in this 'goonda' type man. Bravo girl, we must say!

Prabhudheva seems to have taken inspiration from many of his senior colleagues who believed that a hero must have a dear friend. And here our hero Ajay has a 'friend in need' in Kunal Roy Kapur, who is a foodie and doesn’t know anything beyond eating. This dear friend has nothing better to do than play a lame duck in the film, blindly assisting his hero-friend and unduly being ridiculed by him in return.

Everything isn’t as smooth as it seems. There is a twist in the tale. The Mumbai police is after Ajay, who according to them is the 'Most Wanted'. No, the police isn’t in search of him, but Xavier (Anantharaj), one of the most dreaded criminals in the world. And as expected, Xavier has an informer working for the police!

Now, what does this waiter-cum-roadside 'goonda' of Mumbai got to do with Xavier? Perhaps, you may watch the film to know the suspense element.

Prabhudheva’s films often have skimpily clad dancers grooving to rustic beats. ‘Action Jackson’ is no different. The 'Surya Ast' song has two women in ultra short ghaghras shaking a leg with Ajay along with the background dancers. Not having them wouldn’t have made any difference to an already lifeless plot!

The other two ladies in the film make appearances in the second half. Yami Gautam as Anusha has very little to do in the film. But it is débutante Manasvi Mamgai’s (Manasvi plays Marina) topless scenes that will take you by storm! However, there was indeed no need for such bold scenes, so to speak. The steamy scenes involving Manasvi can do little for a hopeless storyline that will brutally stab your sense of logic.

The saddest part of the film is when Ajay goes missing while his dear friend is stabbed for no fault of his. Ajay merrily returns to Mumbai, leaving his dear friend amidst the villains. Doesn’t Prabhudheva nullify his hero’s heroics by doing so?

Sad that an actor par excellence like Ajay is seen in a film like this, to say the least. Yes, the master of action sequences has convincingly pulled off some breathtaking stunts, but his daredevilry will not be of much help to the film. We all know what Ajay is capable of and ‘Action Jackson’ doesn’t do justice to his calibre.

The music is less than average. Most of the songs are slapped on to the audiences with little melody to offer.

The action master does deserve applause for some unimaginable action sequences. But there is nothing beyond action in the film to be looked for. Both Ajay and Prabhudheva are blessed with matchless talent and it would have been better if the duo had delivered something worthwhile.

Movie-goers expect to get entertained while watching a movie. Alas, ‘Action Jackson’ doesn’t even have an iota of entertainment quotient. Watch the movie only if you are an Ajay Devgn fan!