'Money Monster' engages, but not seriously 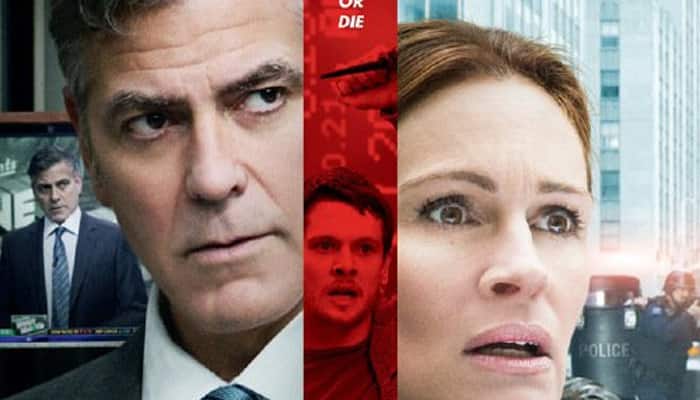 Directed by Jodie Foster, "Money Monster" is a hostage thriller that cuts ice through a satire on broadcast business journalism.

Flamboyant host Lee Gates (George Clooney) of the business show 'Money Monster', peddles financial analysis in the guise of entertainment. Ibis Clear Capital, a company he advised as a safe bet a couple of weeks ago, somehow loses 800 million dollars through unclear circumstances.

Walt Camby (Dominic West), the CEO of the company, who has been invited to the show, does not turn up. Instead, the company's corporate communications officer, Diane Lester (Caitriona Balfe) is on standby via satellite with talking points in hand. She is worried about being grilled on the show.

To pacify her, show director Patty Fenn (Julia Roberts) tells her, "We don't do gotcha journalism here. Hell, we don't do journalism, period".

This lays the foundation of what to expect.

And just as they go live on air, a disgruntled investor, Kyle (Jack O'Connell) lands up in the studio with an explosive vest and a gun, to get answers to his questions: How did Ibis lose its investors' money and why didn't Gates see it coming?

The drama unfolds in real time and is a huge payoff during the narration. The director and the editor deftly capture the controlled chaos of live TV at a very early stage, cutting between the broadcast and the control booth with Patty feeding lines into her host's earpiece and this pattern carries on till the very end.

But unfortunately, in an attempt to give the film some sense of levity, the director introduces weird little comic digressions like focussing the camera on Kyle during an intense moment breaking the momentum of the situation. Similarly, such drastic shifts in the tone of the narrative make the film unintentionally funny.

Also, with Kyle and Lee's relationship turning on its head in the second half of the film, which creates a dichotomy in the character graph, one fails to invest in the characters.

Jack O'Connell is an amazing young actor who is brilliant as Kyle. He lives his character brilliantly.

George Clooney has the swagger and charm to make the character work somewhat, but his transformation from an arrogant loud-mouthed host to a selfless champion, risking his life to protect the person who threatened to kill him, is unconvincing.

Julia Roberts is natural as Lee Gates' loyal and tough director, who takes control during the hostage situation with compassion and dogged professionalism.

The rest of the cast from the boorish hostage negotiators to the wise-cracking New York cameraman, to the police, all appear to be stock-characters.

But it is Emily Meade who leaves an indelible mark as Kyle's pregnant girlfriend. She steals the show with her two-scene role which was craftily written.

Technically, "Money Monster" is well-assembled for an A-lister film.

Overall, despite a great hook, the film is just a popcorn thriller, that never really packs the emotional punch it promised.